This week is the time of the year when the major US broadcast networks reveal their fall line-up of shows. It is also when beloved shows with decent audiences have campaigns to try and get that show another season. One thing which has made that part of the process go a little easier is all the networks have relationships with a streaming service. As an example two shows which draw an audience of about 6 million viewers weekly on CBS, “SEAL Team” and “Clarice” are not canceled but are going to show new episodes on the streaming service Paramount+. On broadcast 6 million makes you a straggler. On a streaming service that’s a big audience. The other advantage this has is to allow an audience who maybe heard good things the chance to catch up on their own schedule. AP Bio is one of those success stories.

AP Bio began airing on NBC in March of 2018 and was renewed for a second season in NBC the next year. It averaged around 3 million viewers over the two seasons. As NBC began putting together their own streaming service, Peacock they decided to add some new exclusive content. A third season of AP Bio was there on day one of the new service. 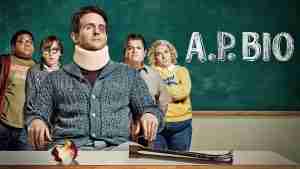 I had a good friend who really liked the show. Mrs. C and I are fond of Patton Oswalt who is one of the main characters. We decided to give it a try. Three days later we were new fans. Others also joined us as season 4 will be coming in a few months.

The show revolves around Jack Griffin who lost his job as a Harvard philosophy professor in a way that made him unable to be hired by another university. It forces him to return to his hometown of Toledo, Ohio to take a job teaching AP Bio to his old high school’s current honor students. The humor of the show revolves around Jack’s far-fetched plans to get back his fame and leave town. The fun is those plans never work out with Jack being a human Wile E. Coyote.

Jack played by Glenn Howerton is a prototypical unlikable protagonist. He is a jerk and happy to be one. The people around him seem to allow him his misanthropic attitude while merrily living their own odd lives. It is satisfying when his plans go awry leaving him as the one who gets had.

The best episode of the series is one which revolves around the annual celebration of “Katie Holmes Day”. It happens yearly on the day that local actress got her first break when she was cast on the TV series “Dawson’s Creek”. The town re-enacts the casting call as the centerpiece of the day. It involves the entire AP Bio cast doing their part to make the day happen. Except Jack who wants to find a way to mock it. It all works because at this point the characters have also become defined.

In the new economy of television there are going to be more shows like AP Bio which find new life on the streaming services. Which seems like a good thing.