Independent perfumer Sarah McCartney has captured specific places in many of her perfumes. Her latest release, 4160 Tuesdays Meet Me on the Corner, captures a time in olfactory amber. 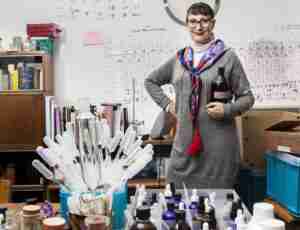 Ms. McCartney grew up in Newcastle, England during the 1970’s. Meet Me on the Corner is named after the 1971 song by the band Lindisfarne. The name is also meant to capture a day before we were all connected via our digital networks. Back then you hung out at a predetermined spot. I knew the general area my friends would be on any given night. If I was going to interact with them, I had to get to where they were. In Ms. McCartney’s case it was the corner by the local firehouse. In my case it was a couple of friend’s houses. It required you to be out in the world. It was a less-connected time but the connections that were made were deeper. Those friends I hung out with in the 70’s are still my friends over forty years later. At a guess I would assume the same is true for Ms. McCartney. That is why I found Meet Me on the Corner a perfume of deep connections.

Ms. McCartney mentions on her website that she wanted to start with the citrus chypre style of perfume popular in the day. That is a tricky thing to pull off today because you can’t use some of the key ingredients that were used back then. What happens in the hands of a talented perfumer is to take something like citrus chypre and modernize it.

It opens on an expansive opening of fresh lemon given a transparency via the jasmine of Hedione. This opening is all 2020. It is the current trend of opacity to a tee. The floral quality deepens through magnolia. It makes for a more substantial floral effect as the perfume moves backward to those 1970’s styles. It completes the trip when violet tints it purple as if under a black light causing the magnolia to glow. Now we are on the corner hanging out. Listening to music on the radio not our phones. The chypre accord straddles both time periods. Moss, patchouli, and sandalwood are the traditional components, but these are modern versions. It makes for a chypre which remembers the 70’s but lives in the present day.

As I wore Meet Me on the Corner I wasn’t so reminded of the 70’s as I was the current day. This is a modern chypre no matter the inspiration. I also was thinking of those friends who have lived through the years with me. We’ve changed into modern versions with hints of what we used to be still apparent. Meet Me on the Corner captures that ideally.