I received some great news just prior to leaving for Pitti Fragranze. I wanted to wait a couple of weeks to share it because I didn’t want it to get lost in my coverage of that event. What I have been waiting to shout about is I have been named as a Finalist Judge for the 2016 Art & Olfaction Awards.

For those who are not familiar with the Art & Olfaction Awards they were established in 2014 as a way to recognize the best perfume in a calendar year within the independent perfume community. Saskia Wilson-Brown in her role as Director of the Institute for Art and Olfaction (IAO) realized there was no way of recognizing the amazing creativity taking place outside of the mainstream. With the creation of these new awards there would now be a way of doing that.

There had been a few previous attempts at trying to award the indie community. They failed because of two things. One was a distressing lack of transparency. Once the entry was submitted it sort of entered a black hole from which a list of finalists would be announced followed by a winner without knowing who was judging or even how it had been performed. The other poorly thought out aspect was an extremely high entry fee. I am guessing the thinking behind that was it would reduce the amount of entries because an indie perfume brand was only going to be able to afford one or two candidates. When all was said and done the indie community felt a bit trampled upon. It was high time for a different way of doing things.

The process for The Art & Olfaction Awards has addressed both of these issues. The entry fee for any of the categories is $65 for non-IAO members and $55 for members. This is mainly to defray the cost of storing the entries and shipping them around as necessary. At this cost it allows for a brand which feels it has multiple worthy entries to enter them. 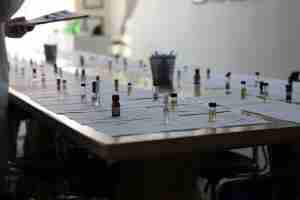 The Preliminary Judging Table for the 2015 Art & Olfaction Awards

The judging could not be more transparent. For the preliminary round a panel of 10-20 individual judges come to the IAO and to a table laid out as in the picture above from last year’s preliminary judging. The nominees are stripped of all the labeling and are just anonymous vials. This allows for the perfume to be the most important thing. Pictures of the judging are posted to the Facebook page. After the preliminary round there are five finalists chosen in three categories: Artisan, Independent, and Experimental. For the Artisan and Independent categories they are sent in anonymous vials to the panel of Finalist judges for those categories. The Experimental category has its own panel of judges. I am one of the finalist judges for the Independent and Artisan categories. I and five other judges will determine the winners based on our votes.

To say I am excited would be an understatement. I have been so impressed with the first two editions of these awards and had been happy with being one of those who covered it. To be a part of the process is more than I could ask for.

Even to the best news there are a couple things I will miss about being a spectator instead of a participant. Over the last two years it has been my pleasure to encourage those brands which I believed had done exceptional work to enter. I was happy to give advice on what I thought was their best of the year. I was also happy to be the pusher urging some of those reluctant to enter. I believe that by being a judge that kind of activity has to end for me. In the spirit of the transparency of these awards I can’t have off the record conversations with potential entries if I am eventually going to be judging them.

While I can’t have personal conversations that doesn’t mean I can’t make a more generic plea here in public. I think that’s why I have a blog.

If you are an independent perfume brand I implore you to enter what you consider to be your best work of the past year. Entries open on October 5, 2015 and must be postmarked by December 4, 2015. The health and vitality of this particular award is made stronger by more entries. All of the rules for entering can be found here.

Finally to those of you who I will not be able to be that annoying voice in your ear this year. To those of you who feel you don’t want to be part of a beauty contest. To those who have that nagging little mantra about not being good enough buzzing in your brain. Get over it and enter. If you have made what you consider to be a good perfume this year enter it and let us both find out how it stands up. The short history of this award has already shown that even the smallest brand can bring home the golden pear. Give yourself the opportunity to see if you will be this year’s success story.

Sometime after the first of the year I will be sitting down across from ten anonymous samples and break into a big smile before undertaking the job of judging them. I want one of them to be yours.