I attended my first Sniffapalooza in October of 2010. For this edition Sniffapalooza Spring Fling 2016, my twelfth, it was the most unique of them all. The reason was in addition to the usual strong lineup of American perfume brands; Europe sent some of their best too. It made the entire weekend feel like it was a summit of perfumery. 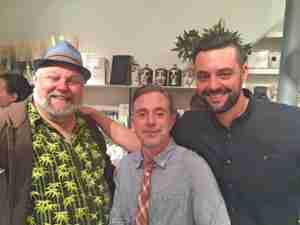 In what is starting to become a tradition Twisted Lily owners Stamatis Birsimijoglou and Eric Weiser invited the early arrivers to a party on Friday night. Inside the best smelling storefront in Brooklyn we mingled and enjoyed wine and camaraderie. Amongst hugs there was sniffing as attendees discovered the latest additions since last fall. We all headed home prepared for the next two days.

Saturday morning began on the Beauty Floor at Bergdorf-Goodman. The hot new addition to the store was The Fragrance Kitchen. Just the week before there was an SRO party to celebrate its arrival. It is an extensive line but it seems like Bergdorf’s managed to convince them to provide one of the best exclusively to them called A Rose With a View. It is a very NYC modern rose. The brand has been around since 2012 but sold exclusively in Kuwait. Now Sheikh Majed El-Sabah is looking to expand to the US and Europe.

I also got the chance to try the new Ex Nihilo Sweet Morphine and Christian Dior La Colle Noire. I liked both quite a bit. Next it was off to lunch at Brasserie 8 ½. 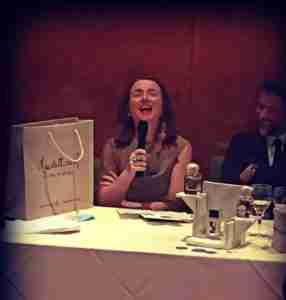 The presentations began with the owners of Masque Milano Alessandro Brun and Riccardo Tedeschi representing Associazione Caterina. That group is about the heritage and future of Italian perfumery. Over the next hour they took us on a journey from the Roman origins of perfume to the present day. Which turned out to be a perfect segue as Stefania Squeglia of Mendittorosa was one of the later presenters and she represents the current exciting state of Italian perfumery quite well.

Holding up the American end of things Barbara Herman introduced her new perfume brand Eris. Ms. Herman has moved from writing about perfume in her blog Yesterday’s Perfume and her book Scent and Subversion to collaborating with perfumer Antoine Lie. My first impression was they managed to find that tricky balance of vintage aesthetic with a contemporary feel.

A drizzly Sunday morning found us in the Annick Goutal store downtown. Annick Goutal is one of those early pioneer brands in the niche space and it is nice to see it continuing to thrive as the market has diversified around it. It was nice to be reminded of that. 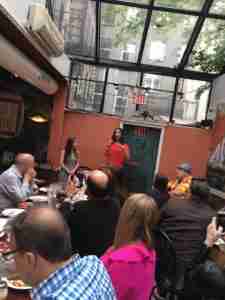 After some more wandering around downtown we arrived at lunch where I was the MC. I thought this year’s group was the strongest of all the years I have been doing this part of the weekend. It started with Sigs. Brun and Tedeschi finally representing their own brand Masque Milano. Both of the newest releases Romanza and L’Attesa were revealed. Mary Orlin of Wine Fashionista gave a fabulous presentation tying together the aromas of the wine we were drinking to perfume. A real treat was the European brand Puredistance was presented by Mary Gooding accompanied by perfumer Cecile Zarokian where they told us all about this fall’s new release Sheiduna. The first Oriental for the brand. I had it on my forearm for the ride home and kept returning to it for the rest of the day. Irina Adam presented her Art & Olfaction Finalist Phoenix Botanicals Peach Tree Garden. Paula Pulvino is translating the perfume recipes of her Italian grandmother into her new brand Villa of the Mysteries. The final presenter was mad impresario Stephen Dirkes of Euphorium Brooklyn who took us inside his creative process for Cilice.

It seemed appropriate to finish with a Brooklyn-based brand so we sort of ended where we started.

As always it was another fun, and exhausting weekend, in NYC. Thanks to Karen Adams and Karen Dubin for putting it all together.