This year Sniffapalooza Fall Ball coincided with my birthday weekend; which made the whole weekend one long celebration for me. Fall Ball 2015 began with a pre-event on Friday night at Brooklyn boutique Twisted Lily. 60 people made it out to enjoy the atmosphere and to get the party started early. I had written about the new Blocki perfumes just before the event and was interested to see the reaction of those in attendance. Everyone headed home so they could be up bright and early on Saturday morning. 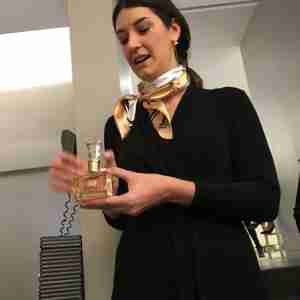 Saturday morning was the official start at the café downstairs at Bergdorf-Goodman. We were treated to short presentations on over fifteen brands. One of the nice coincidences was the Tom Ford presentation announced the return of previously discontinued Amber Absolute back in the Private Blend collection. The fun was Christophe Laudamiel the perfumer behind Amber Absolute was also in the room. It was gratifying to see him smile when he got one of the strips being passed around. The standouts for me were the relaunch of Norell which was one of the original American designer perfumes. Called Norell New York it is a different fragrance but it retains much of what made the original a trendsetter. Another brand making a triumphant return is Shalini. This is one of perfumer Maurice Roucel’s best perfumes; I am happy to see it back in its gorgeous Lalique flacon emulating a butterfly wing. The final presentation is the one which excited me most. The new French brand Ex Nihilo has created a small shop in Bergdorf-Goodman where their eight perfumes can be purchased in the US for the first time. The unique aspect of the brand is in conjunction with the perfumer each perfume can have one of three additional notes added in the boutique to personalize every bottle. The shop was a week away from opening but it is going to be one of the newest stars in the Bergdorf-Goodman fragrance universe. 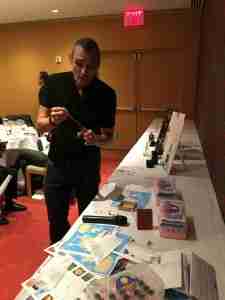 Christophe Laudamiel decanting from a 1921 bottle of Chypre de Coty

Lunch was full of camaraderie as everyone at each table compared purchases while waiting for the program to start. Paula and Teresa of Beautyhabit gave us a preview of the pop-up we would end the night at. Lyn Leigh and Mary Ellen Lapsansky told us about The Perfumed Plume awards for fragrance writing. Sarah Horowitz-Thran presented her Biography Scents of Self perfume set which she is selling on QVC. It is a complete set of four perfumes which can be worn individually or layered. The absolute highlight of Saturday was Christophe Laudamiel who first introduced us to the new educational kit on fragrance called “A Sense of Scents”. This is a fantastic innovation and I will have more on this in a full article. After that he said because it was my birthday he had a surprise. It was a 1921 bottle of Chypre de Coty as perfectly preserved as a bottle of that age could be. Generously coated mouillettes were handed out. You could hear the collected gasp of pleasure of everyone in the room when he announced what the bottle was. This is exactly what makes Sniffapalooza what it is as there are very few events where one can smell the original chypre perfume.

After a stop at the beautiful new Rockefeller Center Penhaligon’s boutique we all headed downtown to the Beautyhabit pop-up shop at Black Label Wine Merchants. Paula and Teresa curated a collection to thrill with new releases from Olfactive Studio, Raw Spirit, and Lubin on display. They are also the first seller of the new ALTAIA brand I am aware of. It was a delightful way to end Day 1.

Day 2 began at Birchbox with Karthik from Harvey Prince presenting the line. After that we were free to explore the downtown Fragrance District as we strolled between Atelier Cologne, Le Labo, Rituals, and Red Flower. Le Labo treated us to a sneak preview of their next new fragrance The Noir 29. 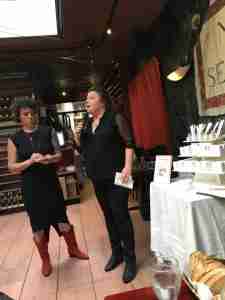 Lunch had presentations from Jennifer McKay Newton who introduced us to her Define Me Fragrance line. The team of Beckie Sheloskie and Katy Knuth told us all about their indie line Rebel Intuitive. Will Yin introduced us to Scent Trunk the monthly subscription service which introduces each member to three new fragrances a month based on their profile.

One more stop for this party and that was the newest addition to the Fragrance District the Byredo store. It is mostly displaying the leather goods from the brand. For this crowd we clustered around the two counters with the fragrance collection. We finished the day sipping champagne and sniffing Byredo perfumes.

As always my thanks to Karen Dubin and Karen Adams for their considerable effort in organizing this event. It was the perfect way to spend my birthday.