I always smile when people can’t believe there are readers for a blog about perfume. I know I was one of them for a long time. Then in 2006 there was a group of online pioneers who started writing about perfume. I’ve always called them “The Original Five”. These blogs were the entry point for so many of us who love perfume. A week ago we lost one of those women who had the drive to start writing about perfume, and make-up, in a public way; Gaia Fishler of The Non-Blonde.

I ran into Gaia at different New York City functions for a few years. We would exchange words once I began writing for Fragrantica and CaFleureBon. In those early short exchanges she answered my questions graciously. She confirmed my belief that 400-500 smartly chosen words was better than two or three times that.

It wasn’t until a party in 2013 that we became friends. It started with perfume. We started talking about unicorns; those perfumes that are discontinued but are incredible. She was the only reviewer who had written about a brand called Gobin Daude. They were only in production a short time. She was the only person I could have a deep conversation about those with. What was amazing was her depth of knowledge as she compared them back to other perfumes. I kind of felt like a student in a private master class. Which was one of the great things about Gaia; in a room full of people she could make it seem like you were the only conversation that mattered. 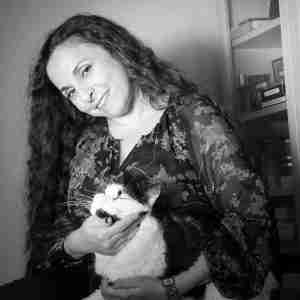 We would meet again a few months later and she would hand me a vial. This was the other perfume we talked about that night; Tauer Orris. That I don’t own and only had a precious few drops. She changed that giving me a sample that has lasted me until today. When she gave it to me, I experienced something she freely bestowed on most who crossed her path; a smile. This is not just teeth and upturned lips. Gaia’s smile was a benediction. She was glad to see you; even happier to give you something that gave you pleasure.

Gaia was also the final push out of the safety zone I had created for myself to start Colognoisseur. I had been thinking about it and she asked me why I hadn’t done it. I had a lot of reasons, but it was mainly I thought it would be too hard being on my own. She looked at me intently and said, “Do it.” I’ve always likened taking a big step to standing at the edge of the high dive and convincing yourself to jump. Gaia was standing at the side of the pool telling me to step off the platform. She was there to support me as she put my blog at the top of her blogroll with “New” next to it. For the first year and a half I got most of my new readers from that. You might be one of them.

I can hear Gaia telling me, in my head, “over 500 words wrap it up.” I smell the drop of Orris on my wrist, I can see her smile. Goodbye Gaia.

8 thoughts on “Remembrance of Gaia Fishler The Non-Blonde”