I met Carlos J Powell the way most of us met him. It was when we got an invitation in 2011 to join a Facebook Group called Peace, Love, & Perfume. For almost ten years Carlos has been one of those central figures in the perfume community online.

Peace, Love, & Perfume was one of the earliest and would grow to one of the largest Facebook Groups dedicated to perfume. Carlos was the ringmaster. If I wanted to find out the pulse of the perfume lovers, this was the place I could do it. There are so many people I would encounter for the first time through a discussion there. These are relationships which endure because Carlos created the type of environment in which they could take root.

We would meet in real life a few months after I joined at an event in New York City. It was here where another piece of Carlos’ ability to capture a moment appeared. When I met him, he introduced me to three other guys with him. They all smiled and said they called themselves the “GoodSmellas”. I remember laughing in appreciation. A few months later they would be the subject of an article in “Elle” magazine on guys wearing perfume. 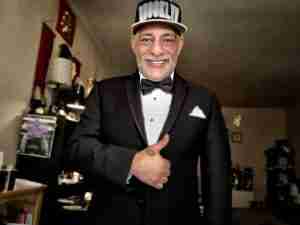 Where he really made his mark on the perfume fragosphere was as a video reviewer on his YouTube channel Brooklyn Fragrance Lover. He has grown that into one of the top tier perfume video sites on YouTube. One of the ways he accomplished his success was breaking out of his home studio.

When we had a conversation on one of my visits to NYC I told him that he had the ability to be the perfume chronicler of one of the perfume capitals of the world. I am sure it wasn’t just my advice because Carlos had an innate ability to find new ways to present his videos. One of them was his visits to different stores to film remote reviews. Another was for him to bring some of his co-workers into a video to rate different perfumes. These were always fascinating peeks into what the non-perfume public thought about fragrance.

Another development was his alliance with fellow video reviewer Steven Gavrielatos and his Redolessence channel. The two of them had an instantaneous chemistry which allowed for them to provide different perspectives on a single perfume. I have always enjoyed this in the other arts. Carlos and Steven would do it for perfume.

Through it all Carlos did this with a happy energy fueled by his love of all things which smelled good. I hope he is at Peace on a cloud of Love from those of us who miss him which were brought together through Perfume.