The beginning of Day 2 at Pitti Fragranze began with a Flash Mob. Okay not really it began with me talking with Andy Tauer about his new collection of Tauerville Flash fragrances. There are three in the collection and I knew I would be seeing him here so I stayed away from trying them. The three perfumes I tried were Incense Flash, Vanilla Flash, and Rose Flash. There is so much to admire from this concept, including the modest prices for these simply packaged perfumes. That being said my presumption was the one which was going to slay me was Rose Flash and it definitely did. If you are a fan of Une Rose Chypree then you simply must try Rose Flash. It is what I am wearing on one arm while I write this.

What’s on the other arm you ask? Unfortunately it is nothing which is for sale. Pierre Guillaume creates a special capsule collection only for Pitti every year. This year, after the success of the Collection Croisiere, he needed to stretch his artistic skills at the other end of the spectrum. The two Pitti only releases were called Lumiere Fauve and Leathermore. The creation of Lumiere Fauve is a funny story as M. Guillaume was particularly irritated by a review of one of the Collection Croisiere. The reviewer intimated it was a piece of crap. His thought was you want to see crap I’ll give it to you but I’ll make it 24K Gold crap. Before I got to try Lumiere Fauve I got to smell the unadulterated version of Hyraceum which would form the crappy core. At 100% strength it nearly made me gag. At 4.7% strength in Lumiere Fauve it was the dirty nucleus to be gilded. I loved both of these purely experimental non-commercial scents. They are the soul of spontaneous creativity. I also tried the new Huitieme Art Shermire and it is a fabulous floral iris done the Huitieme way.

After that I went over to Richard Luscher Britos who were debuting a new sixth terroir fragrance. The only problem was in a bit of fun they placed it behind a locked cabinet. The idea was to send keys to their distributors to come unlock the new release. When I showed up the Keymaster was having lunch but he returned to let me in to try the new release based on the welcome tea you receive when visiting a family in Marrakech. It is another all-natural triumph for the line. 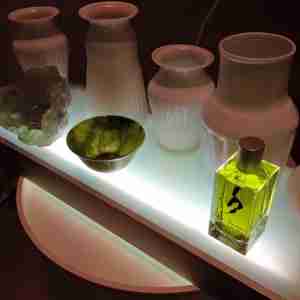 I finally had the time to catch up with two of my favorite people in perfume. First was Olivier Durbano who was debuting his eleventh perfume release Chrysolithe. After last year’s Prometheus he has returned to naming his stone poems after crystals. Chrysolithe is a symbol of purity in gemstone form. The opening salvo of herbal and spice notes draws you in until jasmine and woods provide the foundation. It is another step forward for a perfume brand which has been on a consistent upward trajectory.

I have waited patiently for two years for Ineke Ruhland to release a new alphabet fragrance as we have been stuck on H for a while. I was doubly delighted to find I will get not only I but J too in a few months. As part of the preview of both perfumes Ms. Ruhland sat down with me and, much like the Mane panel yesterday, let me smell the finished product but then also let me try the raw materials which went into it. Idyllwild starts with a green rhubarb which then segues in to a perfectly created pine accord before finishing on an intense woody note. Ms. Ruhland uses sage particularly well to add a veil of smoke. Jack and Jackie is a chilled daiquiri as lime and rum open it up. It proceeds through cedar and a new synthetic called Pyroprunet which is a slow building note which adds a dried fruit aspect reminiscent of raisins. It is a perfume re-telling of that comfort food Rum Raisin ice cream. Now that she had made me hungry and thirsty it was time to close out Day 2.

Tomorrow I am heading to see my chemist’s dream collection Nomenclature to start. Being the last day I will be moving fast as I can to see the last brands I want to see.