It should be no surprise to anyone that if there is a perfume line which is going to excite me it will be one that wears its molecules on its sleeve. In the case of the new brand Nomenclature it wears its molecules on its stylized Erlenmeyer flask bottles. This is the brainchild of creative directors Karl Bradl and Carlos Quintero. There are four synthetics ingredients which are the star of each of the four inaugural releases by perfumers Franck Voelkl or Patricia Choux. My favorite was efflur_esce which features the “Hedione on steroids” synthetic Paradisone. If you are a fan of the Escentric Molecules series Nomenclature is another set of fragrances in that theme. 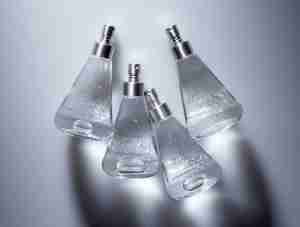 There is a television show called “Who Do You Think You Are?” where a celebrity uncovers their ancestry. The perfume world has its own version courtesy of Marina Sersale and Sebastian Alvarez Murena. The married owners of Eau de Italie did some comparing of their ancestry and found out two of their great great great grandfathers intersected in mid 19th century Argentina. The line is called ALTAIA which is an acronym for A Long Time Ago In Argentina. Each of the three perfumes tell a part of the story of the life and times of Marina and Sebastian’s ancestors. I really fell for the tart orange of Yu Son. All three were composed by perfumer Daphne Bugey.

I love narcissus but it seems like it is never used to good effect. The new Masque Milano Romanza is a narcissus extravaganza. Perfumer Cristiano Canali collaborating with creative directors Alessandro Brun and Riccardo Tedeschi have created a narcotic ode to first love.

For the next hour or so I received sneak peeks of upcoming perfumes from Nishane Istanbul, Neela Vermeire Creations, and Etat Libre D’Orange. One is by Quentin Bisch. One is a modern chypre and the other is A Rummy Delight. Which is which? Time will tell.

I had two final stops to make. One was at Frapin for the new release The Orchid Man by perfumer Jerome Epinette. Despite what the name infers this is inspired by the world of boxing as it was practiced in the 1930’s. M. Epinette has made a light spicy leather which still packs a bit of punch.

My last stop was at Essenzialmente Laura where I had heard great things about the lavender trio of perfumes. Perfumer Laura Tonatto has combined five different sources of lavender into La Lavanda. They came from two places in France, one in Torino, one in Morocco and one in England. Mme Tonatto combines all of them into a knot of lavender which has a mesmerizing fullness to it. The other two Lavambra and La Lavanda di Leonardo are also worth seeking out if you like lavender.

I spent the last hour saying my farewells hugging my perfumed friends. I am always sad to leave everyone even though my feet are killing me.

Until the next time we all meet; Ciao Perfumistas!