There isn’t a great movie about perfume; yet. There is a great movie which features perfume prominently. As of now 2014’s “The Grand Budapest Hotel” is the best depiction of fragrance on the silver screen.

The movie was the eighth directed and written by Wes Anderson. Mr. Anderson has become one of the most reliable stylist auteurs working in movies. All his movies are multi-layered delights. The Grand Budapest Hotel works as a fractured non-linear tale told via time jumping.

It opens with a reporter meeting the owner of the titular edifice, Zero, in 1968. He wants to know how he went from lobby boy to owner. Zero tells the story beginning with his hiring in 1932. The man who hires him is Monsieur Gustave H. He is the majordomo of the hotel in its heyday. In control of everything from his appearance to his guests needs. 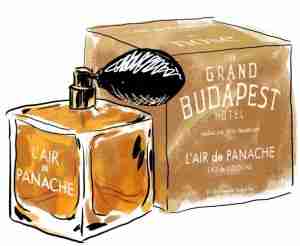 The important part of his appearance is his own signature perfume L’Air de Panache. People know where he has been if they smell it in the air. After one harrowing experience in the movie the first thing he asks for is some L’Air de Panache.

This is the depiction of the concept of the “signature scent”. It has never been depicted in a movie as well. For Gustave H it is part of who he is. He allows fragrance a piece of his personality to present to the world. When he has been deprived of it, he wants it.

For most who wear perfume this concept is what draws them to it. To have a scent which speaks to the world around you. I would say it is a piece of the popularity of artisanal and niche perfumery. That desire to find a scent which presents the way you see yourself to others.

While I don’t have any single perfume which I would consider a signature. I do have perfumes which fit specific occasions communicating the way I am feeling.

For weekend outings Thierry Mugler Cologne or Beth Terry Mare are the fragrance equivalent of jeans and t-shirt. When I am asked to something more formal Clive Christian C or Tom Ford Noir de Noir always seem perfect underneath a tux. I can’t reduce the wide world of perfume down to one single choice. It is too wonderful to me for that.

What The Grand Budapest Hotel does is depict how the right scent makes the person.

Postscript: In the movie L’Air de Panache did not exist. The bottles were filled with water. By the time of the World Premiere Mr. Anderson turned to perfumer Mark Buxton to create an actual version. It was given out as gifts to the cast and crew at the premiere.