Some of our greatest niche perfumers have a fascinating history prior to the aesthetic we know them best for. In Perfumer Rewind I am going to look into some of my favorite current perfumer’s past creations and look for interesting moments of their development. The first perfumer to get this treatment is Jean-Claude Ellena and the year I am rewinding to is 1988 when he was responsible for two launches Maxim’s pour Homme and Balenciaga Rumba. 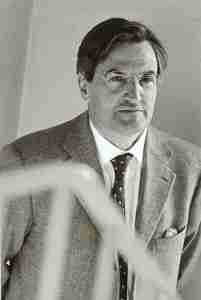 Ask anyone today to describe a Jean-Claude Ellena fragrance and the words minimalist or luminous will likely be the two most common descriptors used. As the in-house nose at Hermes M. Ellena has perfected a style that speaks volumes with few notes. The “Un Jardin” series and the Hermessences are perfect examples of the style he has evolved into. The earliest complete signpost of that style was 1993’s Bvlgari Eau Parfumee au The Vert. What I find completely fascinating was in 1988, after a five year absence of releases, M. Ellena returns with two huge powerhouse fragrances that are as far from what anyone would describe as an Ellena style fragrance. 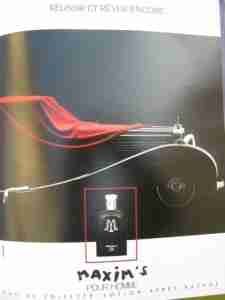 Maxim’s pour Homme was done after Pierre Cardin had bought the rights to the French restaurant Maxim’s, in 1988, with the intention of turning it into a worldwide chain. What was even more interesting was the beginning of building this brand was going to be a men’s fragrance. Pierre Cardin contracted Givaudan to do the fragrance and they assigned M. Ellena. Maxim’s pour Homme begins with classic lavender and clary sage with some bergamot. The heart of Maxim’s pour Homme is where you get the hint of what will become a M. Ellena trademark as he combines geranium, muguet, and rose. Those three notes were often huge sledgehammers of scent in that era but in Maxim’s pour Homme they are so restrained they almost get lost between the top notes and the base notes. As a result the heart only lasts for a few minutes but it is like peering into a crystal ball of what will be as they are perfectly balanced to create an airy beautiful floral character. This character would get refined a lot over the years to become the core of many of M. Ellena’s creations almost twenty years later. The base is leathery musky chypre with patchouli, oakmoss, amber, musk, cedar, and vanilla. The base is classic 1980’s masculine perfume trope. M.Ellena probably didn’t want to rock the boat too much at this point in his career so he played it safe at the top and the base but if you pay attention to the heart you will see the indications of where his true aesthetic lies. 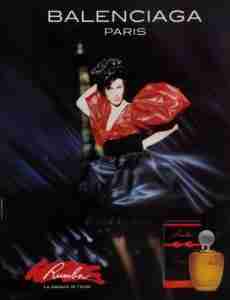 Balenciaga Rumba was a co-creation of M. Ellena and Ron Winnegrad. Like Maxim’s pour Homme it is one particular phase that gives us the insight into M. Ellena’s evolving style. Rumba starts with a fusillade of fruit as peach, raspberry, and plum roar out of the atomizer. Fruity florals were just coming into style and so to go with all of that fruit a full set of florals including jasmine, magnolia, tagete, gardenia, and most prominently, tuberose. This opening is so heady and narcotic it is off-putting these days but in 1988 with Chrisitan Dior Poison the fragrance du jour it almost seems restrained. Then as if a light switch is thrown Rumba turns into this fantastic dry incense. Labdanum is the main resinous source with styrax playing a supporting role with its leathery quality. Amber and vanilla add a bit of warm sweetness to the arid resinous aspect. For those who love the Hermessence Ambre Narguile you will recognize the base of Rumba as the Neanderthal version of that fragrance. The drydowns of Rumba and Ambre Narguile are very similar with the tobacco of Ambre Narguile being the major difference as well as sixteen years added experience.

M. Ellena would continue with similar styles to Maxim’s pour Homme and Rumba with Hermes Amazone, Rochas Globe, and Jitrois Paris until that inflection point in 1993 with Bvlgari Eau Parfume au The Vert began the style we most commonly associate with M. Ellena.

Maxim’s pour Homme and Balenciaga Rumba are still available through a number of internet resellers and auction sites for pretty reasonable prices.

Disclosure: This review was based on bottles of Maxim’s pour Homme and Balenciaga Rumba I purchased.