There is no ingredient more ubiquitous, and important, in perfumery than musk. The uses of all of the chemical derivatives of musk have resulted in the expansion of the perfumer’s palette dramatically. From a chemist’s point of view the story of the evolution of the synthetic musks is a still developing chemical tale which has now spanned three centuries of chemistry and the inherent advances in new ways to put together molecules. It almost seems that with every new advance in chemistry it wasn’t too long before someone found a way to make a musk aromachemical with that new methodology. 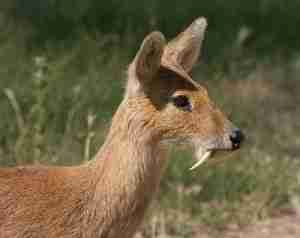 The reason for needing synthetic musks is because the natural source is a living animal, the musk deer. For many years these animals would be hunted and the glands used to secrete the natural musk would be removed from the animal, killing it. The collected tissue would be dried, then opened to harvest round fatty nodules which would be tinctured. To get one kilogram of these nodules it could take as many as 50 musk deer to be killed. Musk grains were worth twice their weight in gold and because of this value the hunting of the musk deer drove them to the brink of extinction until they were placed on the international protected species list in 1979. There is still a legal quantity permitted to be harvested but it is of such a small amount that perfume use is not high on the list for it.

Even though harvest of natural musk wasn’t outright banned until 1979 the cost of it would cause early aromachemical experimenters to look for more cost-effective replacements. In 1888 the first synthetic musk was discovered but Albert Bauer wasn’t looking to make an aromachemical he was looking to make an explosive. There is perhaps no single molecule which has led to more rapid advances in chemical synthesis than tri-nitro toluene or as it is more familiarly known, TNT. From the moment of its discovery in 1863 organic chemists were looking to make changes to make a better molecule to go boom. Hr. Bauer was no different and as you can see in the diagram above he made one change to TNT and found something that did not explode, except in your nose. I am always amused when I read the 19th century chemical literature because contained within the experimental descriptions is how a molecule smells, and often, how it tastes. There was no OSHA back in 1888 to protect Hr. Bauer from himself. Because Hr. Bauer followed his nose he realized he might have found a different lucrative market instead of ammunition. By improving the synthesis he could produce what would come to be called Musk Bauer for about $500 per kilogram.

Hr. Bauer would spend the next ten years perfecting three other musks; musk xylene, musk ketone, and musk ambrette. This class of molecules would come to be known as nitro musks. Each of these had different scent profiles and would be used as the predominant source of musk in perfume for almost 100 years. In 1921, Ernest Beaux used a cocktail of nitro musks, but primarily musk ketone, in Chanel No. 5. Musk ambrette is the key note in Francis Fabron’s original formulation of Nina Ricci L’Air du Temps, in 1948. Throughout most of the 20th century the number of nitro musks proliferated and were used extensively in not only perfume but soaps, detergents, and air fresheners.

The time of the nitro musks would come to an end in 1981 because of suspected neurotoxicity. For perfume there was also another reason as these molecules were very sensitive to light and under prolonged exposure to sunlight the nitro musks would decompose. It was probably the decomposition of nitro musks that has led to the concept of perfume “going bad”. As a medicinal chemist when I first looked at these molecules I wasn’t surprised as, by 1981, it was well-known in the pharmaceutical community that these molecules produced significant side effects in clinical trials of molecules that contained them.

Obviously that isn’t the end of the story of musk, just the nitro musks, and in next month’s Olfactory Chemistry I’ll pick up the tale as chemistry reacted and came up with a new class of musk.

4 thoughts on “Olfactory Chemistry: Nitro Musks- From Boom to Musk”