The yearly festival known as Burning Man is a consistent source of inspiration for the participants. As one who attended the early Burning Man events out on the playa it is stunning to see that it has grown from a couple thousand to tens of thousands. Burning Man was always a moment for the participants to find out something about themselves as part of a temporary community. Even as it has become larger there are always signs that it still inspires on an individual basis. For evidence of that you need look no further than Boulder, Colorado based independent perfumer Amber Jobin and her Aether Arts Perfume line. Ms. Jobin creates a new perfume for each Burning Man she attends. For last year her Burner Perfume No. 4; John Frum was one of the best new perfumes of the year and it won one of the inaugural Art & Olfaction Awards in the Artisan Category. Ms. Jobin is one of the rising stars in independent perfumery and it was with interest I waited to see what this year’s Burner Perfume would be. 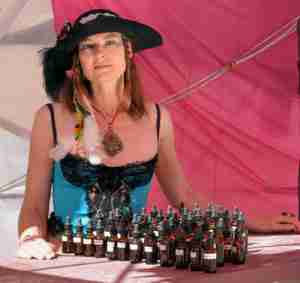 Burning Man has a theme every year and Ms. Jobin designs her perfume to fit that theme. For 2014 the theme was “Caravansary: The First Information Highway”. Ms. Jobin was drawn to the idea of “Imagining all the precious and exotic cargo that passed along the Silk Road.” She realized this was a good opportunity to make an incense perfume. As she thought about it she wanted to make a different incense perfume. She chose an ingredient which is “a plant that shares many of the same components, cannabis.” All of this is what Burner Perfume No. 5: Incense Indica became. It seems like as marijuana has started to become legalized it has become more common as a perfume ingredient. Incense Indica is one of five cannabis based perfumes I received just in the last six weeks. That coincidence has also illuminated, to me, the versatility of it as a core note. Ms. Jobin does use it in place of a traditional frankincense in a typical incense perfumer design.

Incense Indica opens with opoponax, choya loban and cannabis all rolled together in a magnificent olfactory spliff. Ms. Jobin captures not only the narcotic depth of the cannabis but also the green sticky resinous quality, too. It is that combination which makes cannabis such an interesting note to build upon. The choya loban adds a cloud of smoke over the early moments. Often smoky notes can overwhelm. Ms. Jobin uses it as a distinct opaque haze. All of this turns decadent with honey as it picks up on the cannabis and sets it glowing. Myrrh adds to the sweetness quotient.. Then Ms. Jobin lets a fully indolic jasmine sambac out to search out all of the deeper skankier noes within the cannabis. The last stage is gorgeously animalic and greenly herbal on a cedar and sandalwood base.

Incense Indica shows cannabis to be a fully functional perfume ingredient and Ms. Jobin has used it well by skillfully using the right notes to fully explore all of the fragrant potential within. The jasmine and cannabis pairing is the one which really grabs ahold of my imagination. One of the principles of Burning Man is that of Radical Self-Expression with these series of Burner Perfumes Ms. Jobin lives up to that in all of the best ways.