If there is anything which is going to harm perfumery in the long term it is not going to be the usual suspects of draconian regulations or astronomical prices. The death of perfume is going to come with the incessant homogenization going on in the mass-market sector. The perfume business which is making new perfumes in this sector has shunted aside creativity and promoted the focus group. By gathering average perfume wearers and letting them in to the creative process they end up creating perfume afraid to be anything but not to offend any sensibility. It also has the effect of making all of them smell the same by recycling older tropes from more ambitious earlier releases. The final decision on what goes in the bottle is not coming from a creative director with a specific vision. It is instead coming from averaging the results of questionnaires and picking the one which appeals most broadly. Except every great perfume which has ever existed has always made a bold statement about what it was and dared an audience to come to it instead of the other way around. One of the first perfumes I can remember doing that was 1977’s Yves St. Laurent Opium. If there was a perfume of the disco era Opium was it. Because so many women wore it there were many mornings following a night out where I could easily pick up the sweet vanilla laden base notes on my clothes. Opium was a trendsetter for years. 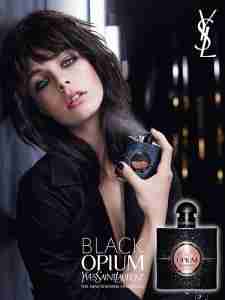 Now in 2015 there is a new flanker of Opium called Black Opium. The press release claims it is an Opium for a contemporary Rock Chick. The ad campaign features model Edie Campbell looking very Joan Jett while spraying on Black Opium. Except while I know the younger generation makes a habit of looking unimpressed about anything the look on Ms. Campbell’s face borders on apathy. It’s almost like there should be a thought bubble above her head going, “This is a quick buck.” When I received the press materials prior to receiving my sample I found it all very incongruous. Within days something even more ominous would create more concern. Creative Director of Yves St. Laurent Hedi Slimane posted on Twitter, followed up with a press release, disavowing any involvement in the creation of Black Opium. Who was minding the store? I am not sure but after wearing Black Opium it feels solidly like the product of a thousand focus groups. 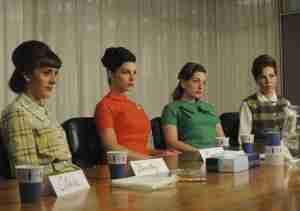 The Creative Directors? (Photo: From the TV Series “Mad Men”)

A group of four perfumers are credited with Black Opium, Honorine Blanc, Olivier Cresp, Nathalie Lorson, and Marie Salamagne. That is a great team of artists who if left to their own devices under appropriate creative direction could make a great “Rock Chick” perfume. What they have produced is something generic with aspects of hundreds of fruity florals and gourmands of the past all smooshed together into something afraid to take a stand on anything for fear of offending.

Black Opium opens with pink pepper, very sweet manadarin, and crisp pear matched with mimosa. It is modern fruity floral territory being trod upon for the umpteenth time. It eventually evolves towards a bland attempt at coffee, vanilla, and patchouli over cedar. Clean woody gourmand territory, encountered many times previously.

Black Opium has 10-12 hour longevity and prodigious sillage, probably the only thing it shares with the original.

Black Opium is not a bad perfume. It is a safe perfume. It is a perfume engineered through social means to appeal to many. It is devoid of character and as boring as Ms. Campbell looks in the advert. If the creative directors for the designers don’t have the opportunity to apply their brand vision to the perfumes which carry that designer name this will work like Continental Drift, in reverse, and every new release will eventually smell the same creating an olfactory Pangea. As one who loved the way the original Opium defined a moment in time via scent it is sad to see an opportunity for Black Opium squandered for safety’s sake.

Disclosure: This review was based on a sample provided by Yves St. Laurent Beaute.