I remember going to my local Neiman-Marcus one day in 2007. The head of the fragrance department was excited to see me because she had a new line to show me. I was taken to a counter where a row of brown bottles with round gold-colored orbs on top. This was my introduction to Tom Ford Private Blends. It is hard to underestimate the influence this would exert over the fragrance market. It defined the ultra-luxe sector. They also defined a Tom Ford fragrance aesthetic. As he and Karyn Khoury would creatively direct a kind of boldness which would become a defining trend of the noughts. Over time I would own all those initial releases and many of the ones which followed. 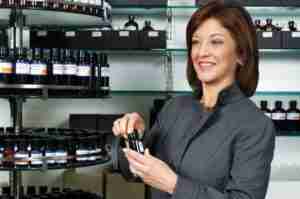 Like many brands the most recent releases have shown an evolution. I like many of them. Lost Cherry is a good example of how that early aesthetic remains in place without becoming stale. There have been attempts to reach out to the newer perfume consumers who perhaps enjoy a lighter style. Even those still had that Tom Ford-ness present. When I received my sample of Tom Ford Private Blend Ebene Fume it felt like the past and present were in the bottle.

One of the things that was great about the early releases was the highlighting of an ingredient that was given a luxurious setting. In Ebene Fume perfumer Rodrigo Flores-Roux features the wood of palo santo as the focal point. This wood has seen some popularity in niche perfumery over the last few years. It has a scent profile which is like sandalwood. In the areas where it is indigenous it is seen as an instrument in religious rituals. Sr. Flores-Roux sees the parallel between burning palo santo and incense to create the nucleus of this.

Both are present in the beginning. Twin spirals of resin and wood which form a central double helix. In the earliest going there is a subtle theme of green running through things. Thyme, papyrus, and violet leaves add a noticeable accentuation to the main ingredients. Osmanthus serves as a bridge to a sturdy leather accord. The palo santo and incense swirl around it. Then a simple piece turns this transcendent.

Cade oil is a perfume ingredient I usually curse inwardly when I see it on an ingredient list. In the hands of amateurs, it is a headache inducing sledgehammer which obliterates anything it is around. Sr. Flores-Roux is a maestro who knows the right amount can change everything. In this case the cade oil acts as the flame underneath a pyramid of palo santo and incense. I could imagine flames licking at the woods and resins. This is all perfectly balanced. It is this single addition which elevates Ebene Fume.

This will make long time Private Blend fans think of the past and there is some of that. There is also a dose of the present as a more modern ingredient is given the Private Blend treatment. What it confirms is after fourteen years and seventy perfumes there is no lack of imagination here.

Disclosure: This review is based on a sample from Tom Ford Beauty.