I’ve mentioned in other places that I am what is called a wetshaver. What that means is those multi-blade monstrosities meant to be used on my face hold no appeal no matter whether they swivel, vibrate, or grant a number of wishes equal to the number of blades. Instead after I step out of the shower every morning I take an old-fashioned Gillette Red Tip loaded with a single double-edged blade to do my shaving. This is also accompanied with a brush loaded with shaving cream which I use instead of an aerosolized gel. My wetshaving routine appeals in large part because of the smell of my shaving cream. I can pick something which will go with whatever I am wearing that day. One brand of products I own a lot of come from The Art of Shaving.

The Art of Shaving caught on to the rise of the quality shaving products trend and spread throughout the country with stores in many upscale malls. I was happy to add their products to the others in my cabinet. What was interesting to me was a line which carried everything for a shave did not have an equally well-done fragrance. When they started they just had two; one called Lemon and one called Sandalwood. The sad truth was the shaving creams had more depth than the colognes. Somewhere along the line that criticism must have spurred them to give the perfume thing a second try and at the end of last year they released a five-fragrance collection called Cologne Intense. My local outpost was excited for me to give them all a try, 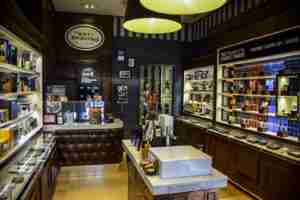 I will say that all five of the new releases were better than the first two; there were some lessons learned over the past ten years. As for the perfumes, I would say they went two for five. Vetiver Citron and Green Lavender were nice but each carried a flaw which pushed me away. In Vetiver Citron the early citrus is bracing but afterward there is a muddy spice heart over an even less-defined vetiver. Green Lavender has a sharp punch of peppermint which makes me think of mouthwash instead of cologne. Surprisingly Oud Suede actually comes together very nicely leading to an oud accord at the base. It is very well done. Of the remaining two I expected the mix of clary sage and lavender along with the titular notes of Coriander & Cardamom to be my favorite. It is quite good and if Sandalwood & Cypress didn’t exist it would have been.

What drew me to Sandalwood & Cypress was an attention getting whisper of chamomile, baie rose, and cardamom. This was like a soft kiss of soft herbs and spices. It gets roughed up with cumin, black pepper, and laurel leaf before heading to the promised woody base. There along with sandalwood and cypress there is also cedar and guaiac. Together they form a solid woody accord which doesn’t overwhelm. It forms a foundation for the spices which works nicely.

While I don’t think they have the art of fragrance down; The Art of Shaving is getting better at it. If they do more like Sandalwood & Cypress they might be able to master the art one day.

Disclosure: This review was based on samples provided by The Art of Shaving.