Beauty is in the eye of the beholder is a truism. In the Early 1990’s I beheld supermodel Helena Christensen when she was at the height of her fame. In a room full of other professional models it was apparent to me why super was attached to her. She carried a special quality which ran from the top of her head to her toes. When having any discussion on beauty she is one of my prime examples. I have always followed her career. Last year she stepped into the niche perfumery world as the creative director on Strangelove NYC (nee ERH1012) deadofnight. It has been eighteen months since that release and the second perfume has recently arrived Strangelove NYC meltmyheart. 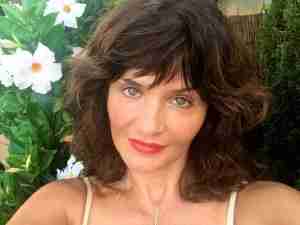 Ms. Christensen worked with perfumer Christophe Laudamiel who also was responsible for deadofnight. Ms. Christensen says she wanted meltmyheart to be “tender and poetic”. M. Laudamiel has taken some of the more powerhouse notes in the perfumer’s palette and made them live up to that description. When I tell you that the heart of meltmyheart is dark chocolate, oud, and orris I suspect tender and poetic does not rise to the top of the adjectives you might expect to use for that mixture. If there is one thing I have learned while following M. Laudamiel over the years is he is one of the few who can make the most obstreperous notes behave like they never deserved that reputation. For meltmyheart he has achieved that as he does make those notes tender and poetic as the core of this perfume.

M. Laudamiel uses a zingy opening of ginger and bergamot. If meltmyheart is all about falling in love this is the frisson of meeting someone special for the first time. Nutmeg provides the transition into the heart. The chocolate comes out first as it picks up the sweetness of the nutmeg. The oud comes next and I am struck once again by what a perfect partner chocolate is for oud. It doesn’t get used as much as I would like even though in meltmyheart it is an excellent choice. For a short while I begin to wonder where the orris is. As the chocolate and oud have my attention. The orris is there but it takes a little time to find its position as it catches some of the bitter components of the chocolate and powders over some of the more intense facets of oud. What the orris does is provide the harmonic to allow the best qualities of the chocolate and oud to predominate. The skill of M. Laudamiel to pull this off and to keep it almost transparent in its effect is fabulous. When I wore meltmyheart I expected this phase to just expand and evolve into something overpowering. It never does. Instead it is a relationship of equals which has an unusual fragility I never expected. Many hours later a bit of smoky sage absolute winds its way through the orris/oud/chocolate making it seem like it is all melting away in a cloud of smoke.

Meltmyheart is a perfume oil and has 24-hour longevity with no appreciable sillage.

Ms. Christensen and M. Laudamiel have made a perfume around a perfectly executed central accord. I spent an entire weekend wearing this. Like Ms. Chritensen when I saw her back in the 1990’s meltmyheart is a perfume of beauty to behold.

Disclosure: This review was based on a sample provided by Strangelove NYC