One of my favorite movie and literary characters is Wiily Wonka. As created by writer Roald Dahl in Charlie and the Chocolate Factory and assayed on screen by Gene Wilder and Johnny Depp Willy Wonka is a genius of confection. His factory turns out the most amazing candy but chocolate is his specialty. What I enjoy about the character on either the printed page or the silver screen is despite being childlike in his desire to create sweets there is a hidden sour underneath which peeks out when provoked by poor behavior. That concealed danger beneath the faux(?) innocence creates a complex character. When I was at Esxence 2016 I met a young perfumer by the name of Giovanni Sammarco. He showed me his line of four perfumes he has released under his name, Sammarco. When he handed me the strip with Bond-T on it I was immediately reminded of Willy Wonka. Bond-T is a chocolate gourmand with hints of danger within.

Sig. Sammarco was inspired to create Bond-T by his own visit to a real chocolate factory. On his website he wrote that he wanted Bond-T to be, “It is the smell of the chocolate factory, it is a smell of exotic place, the cocoa absolute with patchouli, and a touch of osmanthus.” If Bond-T was just that it would be a terrific slab of chocolate fragrance. Except Sig. Sammarco also has a bit of a subversive side as a slug of animalic ingredients provide the hidden sneer. 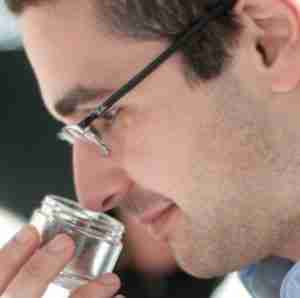 From the first moments I wore Bond-T I was enclosed in a deep cocoa and patchouli chord. This has been done many times over the years except Sig. Sammarco has elicited something different. I am not sure if it is the specific materials he is using or the amount of them in the formula but together there is a rich alcoholic component sort of sweet like brandy. I like the unpredictable arising from the predictable. Osmanthus provides a fascinating intermezzo as the apricot and leather quality adds the expected and sets the stage for the unexpected. That is the leather nature of the osmanthus is but a prelude to a feral stalking castoreum. The animalic nature transforms the innocence into something with a dangerous grin you might be best advised to be wary of.

Bond-T has 18-20 hour longevity and above average sillage.

I haven’t encountered a truly great gourmand in a long while. Bond-T ends that drought. This is a fabulously complex construct from the mind of Sig. Sammarco. It is so good I am going to check for Oompa Loompas the next time we meet. If you’ve ever wanted a bit of subversive growl with your sweetness Bond-T will fit the bill.

Disclosure: This review was based on a sample provided by Sammarco at Esxence 2016.