Continuing my reviews of the three Project Renegades perfumes begun with yesterday’s post.

Bertrand Duchaufour is one of my favorite perfumers because I feel like I can see his desire to use the ingredients on his palette in different ways. He is also the perfumer for whom I have probably given the most nicknames to from Pirate to High Priest of Incense I have always admired his way of designing perfumes. As I was thinking about his perfume he composed for Project Renegades I return to that focus of doing something different to achieve a desired effect. It turns him into The Experimentalist.

M. Duchaufour opens his perfume with 10% pink pepper. I am not sure how often I have smelled that concentration but at that level it effectively replaces that ozonic suite of notes which usually open this style of fragrance. At this kind of level the pink pepper has a surprisingly uplifting presence. I think I expected to get bowled over by it. Instead I was enticed into the cool pine forest as balsamic notes matched with cardamom, cassis, and juniper berries provide that accord. Once they become apparent it also brought to my attention the balsamic qualities inherent in the pink pepper at this concentration. This dries down into an amber and incense base which also carries a bit of desiccated driftwood to remind one we are on the beach. 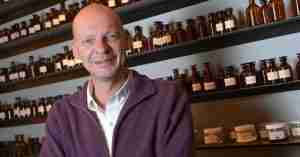 Mark Buxton is a perfumer who lives in the specific moment of creativity of a perfume. I like that he gets a concept within his imagination and then executes upon that in a matter of days. It is perfumery as practiced by only those skilled enough to trust those impulses to take you to a good place. Over his career knowing when to leave the well-trodden path has served him well. For Project Renegades he wanted to throw the saddle off of his horse and ride off at breakneck speed just to see where these notes would take him. It makes his Perfume Renegades entry the most unusual of the three as only The Instinctualist could provide.

I use the horse analogy because Mr. Buxton combines a sharp green opening of basil and galbanum with a stinky animal accord. He told me at Esxence he wanted people to go “WTF!” when they first sniffed it. With me it definitely has that effect. It reminds me of when my dog comes in from a summer rain shower after the grass is mowed and he has rolled around in it. It is weird and that quality is not relieved as we move deeper in to the development. A spicy rose is enhanced with black pepper, red pepper and clove but the stinky animal accord pushes right up against the rose corrupting it. All of this gives way to a very warm base accord of sandalwood and amber.

I have had a great deal of fun with these Project Renegades perfumes. Each of them feels characteristic of the perfumer behind them. I also returned often to my analogy of a music supergroup in perfumed form. When that concept succeeds it is because the musicians are tasked with taking on different tasks than they usually do. Project Renegades saw these three perfumers take the opportunity to let The Scientist, The Experimentalist and The Instinctualist take on fragrance construction in a different way helping to illuminate what independent perfumery is all about.

Disclosure: This review is based upon samples from Project Renegades I received at Esxence 2016.