Perfume brands can sometimes become known for a particular style of perfume. The Italian brand Profvmvm is one of those. Overseen by the Durante family, Profvmvm has produced some of my favorite gourmand fragrances. All of the releases hew to a simplistic construction of three to five notes. They are chosen most of the time to deliver a singular effect which doesn’t evolve once all the notes come together. I have likened this to perfume making in the era of Twitter. Communicating an olfactory idea in a few well-chosen characters.

Because of this past I was very interested when Osswald NYC informed me they were getting an exclusive for the store. It is called Meringa and is based on the equally simple baked good, meringue. Meringues are as easy as beating egg whites and sugar together until they stiffen enough to be shaped by a couple of spoons of a pastry bag. They are very commonly flavored with light flavors of citrus or almonds. My favorite use of meringue comes from a French dessert called Ile Flottante. Ile Flottante translates to floating island. It is visually exactly that as an island, or islands, of meringue float on top of crème anglaise. In one tropical French restaurant their variation was to use orange blossom water. When I first smelled Meringa that is exactly what sprung to mind. 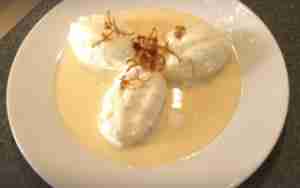 Meringa opens with a breezy orange blossom. It is also given a bit more power with a bit of jasmine in a supporting role. This is the lightly sweet meringue. The crème anglaise comes from a basic combination of vanilla and tonka bean. The tonka bean imparts a bit of a toasty sweetness but this is really a vanilla foundation. That’s it. Just like the dessert I am reminded of the orange blossom as it floats atop the vanilla.

What I found very enjoyable about Meringa was that as a gourmand representing something very sweet over two days of wearing it I never felt like it became cloying. It is something I have problems with many times as a sweet gourmand just becomes treacly and irritating towards the end of the day. Meringa is constructed with such a light hand it does float with presence without annoyance. It is another gourmand triumph from a brand which seems to know how to do this style of perfume.