Prada has become one of the more reliable designer perfume offerings in the mainstream sector. I can even go further and say the overall collection is the most coherent and best at the department store. I would chalk that up to the fact that Daniela Andrier has translated the same style and creativity that she uses on the more expensive creations for the brand to the general audience releases. I have unhesitatingly steered people to the brand because it has something good to great for everyone. Even the flankers are well-thought out. Except the latest release, Luna Rossa Carbon, is less a flanker than something which stands all on its own. 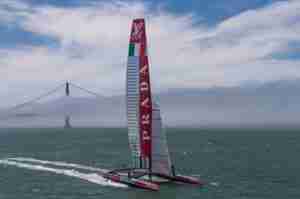 I have always felt an attachment to the Luna Rossa series because it is inspired by the Italian effort in the America’s Cup sailing competition. The boats have competed since 1997 and Prada has always been the team sponsor with their name prominently featured on the boats. The team has always been one of the innovators in design which is a significant piece of the America’s Cup. The team which marries superior engineering and sailing usually takes home the trophy. Luna Rossa has a desire to show off Italian design in every way. Prada finally took this partnership and used it in 2012 to release Luna Rossa. Mme Andrier served up a fougere anchored by clary sage. Through three subsequent flankers she would refine this idea of a fresh fougere which are all well done. Which was why when I received my sample of Luna Rossa Carbon I expected more of the same, only to be surprised that Mme Andrier took a different tack this time.

The previous Luna Rossa incarnations were Mme Andrier finding ways to capture that sense of being propelled through the ocean by the wind. She found clever ways to introduce fresh without relying on the typical aldehydes, ozonic notes, and Calone. For Luna Rossa Carbon the lavender is still present to create the fougere but the overall effect is more industrial and obviously synthetic. Carbon fiber is the construction material for these racing boats and I wonder if that was what she was trying for. I enjoy fragrances which unabashedly embrace the synthetic which seems to be the case here.

Luna Rossa Carbon opens with lavender and bergamot. I believe Mme Andrier chooses the more austere lavandin with its higher percentage of camphor. In the past that camphor has been used as the foundation for Mme Andrier to splice the other choices for fresh notes on top of. In Luna Rossa Carbon she uses the camphor to set off the green rose quality of geraniol in the heart. It has a deepening effect which Mme Andrier modulates a bit by using heliotropin which grounds it with a bit of the vanilla cherry nature it is known for. This doesn’t get gourmand-like it comes off more like the sweet smell of freshly extruded plastic; in a good way. A suite of woody aromachemicals provide part of the base accord which are combined with patchouli creating a solidly darker base than ever before in a Luna Rossa fragrance.

Luna Rossa Carbon has 12-14 hour longevity and above average sillage.

There is a moment in every sailing race when a captain and the tactical team must make a strategic decision to chart a different course. It is done based on the knowledge of the waters being sailed in and the conditions learned over sailing them for weeks and weeks. At the moment of making the decision to take a different tack you are hoping for the wind to fill the sails as you expected. Mme Andrier is performing a perfume version of this maneuver. For those who have enjoyed the past Luna Rossa releases this one is enough of a departure that you should try it before expecting a continuation. For those who want to try something delightfully different in the department store I suggest setting course for the bottle of Luna Rossa Carbon.

Disclosure: This review is based on a sample provided by Prada.