There are so many fragrances these days with musk and/or oud listed in their notes. The truth is, as with ambergris before it, the presence of these notes are actually other materials substituting for them. Musk has a host of botanical and synthetic stand-ins and nagarmotha does double duty as oud in some fragrances looking for the effect without adding to the cost. As part of a mixture of other notes these approximate the effect of the real thing well enough. In truth of fact most perfume lovers have never really had the opportunity to smell either real oud oil or actual musk harvested from the musk deer. For those who have always wanted to know what they smell like there is a very special opportunity for you to be able to do just that.

David Falsberg the iconoclastic perfumer behind Phoenecia Perfumes has become the man to turn to when it comes to finding an authentic oud experience. Through Phoenecia Perfumes he releases Realoud in batches identified by the month of release because he only sources his oud from reliable sources in small batches. He then takes what he acquires and blends a new version of Realoud. The current one labeled 04/14 might be my favorite to date because to his Hindi oud he adds my favorite Laotian variety to create a real “mukhallat”.

One of the best things about Mr. Falberg is he is a consistent correspondent on his creative process. It is often like watching The Wizard of Oz pulling levers, causing steam to billow and flames to jet skyward. For all of the intense passion on display the fragrances often display real inspiration. One which had my attention since he announced he was working on it at the beginning of the year was Oud Taiga.

Oud Taiga is at its heart a combination of the high-grade Hindi oud with a 50-year old vintage authentic deer musk. Mr. Falsberg could have just let the incredible authenticity carry the day but he wanted to re-create a true piece of perfume the way they used to do it. Oud Taiga is everything it was promised to be. 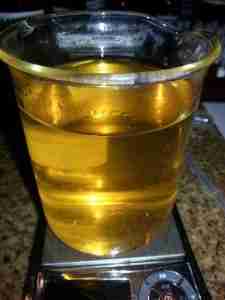 It is hard not to be drawn to the musk and the oud from the first moments you put some Oud Taiga on. Because of the genuine nature of the two central ingredients they pull you like high powered magnetic fields towards them. Don’t get so focused on the trees that you miss the delicate forest Mr. Falsberg has constructed to surround these massive sentinels at the heart of Oud Taiga. Cardamom, lavender, sandalwood, davana, and cedar add nuanced texture and complexity to two notes that are perfume dimensions all to themselves. He has chosen very wisely to use them to again create a “mukhallat” style perfume. That means everything is there right from the start and it tends to fluctuate over time with certain of the supporting notes temporarily ascendant only to let something else take over later on.

Mr. Falberg’s insistence on putting the real ingredients in his perfumes makes every oud he makes something to be cherished, and I do. Oud Taiga is a cut above that as the reality of having real oud and real musk in a composition makes it extremely special. Mr. Falsberg has created a fragrance that hearkens to the past but hews to the indie perfume aesthetic that Mr. Falberg has become one of the leaders of; it truly is “The Real Thing”.

Disclosure: this review was based on a sample provided by Phoenecia Perfumes.