One of the things I wonder about is when a perfumer moves to their own brand, do they ever revisit a previous perfume they made. They produce so many mods in pursuit of a final formula for a client is there one they liked more than what was marketed? The creative director is probably the final word but without a place to release it the discarded versions never see the light of day. One thing I know is perfumer Michel Almairac was the perfumer behind some of the greatest mainstream perfumes ever. The question is was there another version of one of those that could have also been as influential. The new release from his Parle Moi de Parfum brand, Papyrus Oud 71, might answer that. 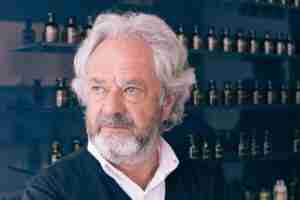 If there was a particularly fertile creative partnership for M. Almairac it was with Tom Ford when he was overseeing the Gucci fragrances.  Starting with Gucci Rush in 1999 they would make a memorable trilogy ending with Gucci pour Homme in 2003. That perfume has been discontinued for a few years but I, and many others, consider it to be one of the best. When I saw the name Papyrus Oud it was hard not to make a leap because papyrus was a keynote in that earlier fragrance. It turns out that it is less than that; which in the end makes it more.

The aesthetic M. Almairac has employed at his own brand is one of simple constructs which create their impact where they intersect. It has been one of the reasons I have enjoyed many of the releases, so far. Papyrus Oud is another piece of that continuum.

The papyrus appears right away, but rather quickly a delineated frankincense marries itself to it.  This reminds me of ancient Egyptian scribes writing on papyrus scrolls as a stick of incense smolders nearby. This is a gorgeous duet. It is a dynamic match as the resinous incense slides across the lightly green papyrus. The oud appears as an accord. M. Almairac can tune that accord such that it provides a supporting role to the other two ingredients. This is finished off with a set of the more animalic musks.

This is not Gucci pour Homme Take 2. The presence of the papyrus and incense are going to lead many to make that comparison. Papyrus Oud 71 is more emblematic of current minimalistic perfume trends, thankfully so. Was this an early mod that Mr. Ford rejected? I doubt we’ll get an answer to that question although I could see this being a very early mod showing how papyrus and frankincense work together. The bottom line is Papyrus Oud 71 stands on its own upon pillars of papyrus and frankincense.

Disclosure: this review is based on a sample provided by Parle Moi de Parfum.