Weeds get a bad rap. As I watch one commercial after another offer me ways to kill them. I know they can be seen as an eyesore on the perfectly manicured greensward. Here at Colognoisseur HQ we have a more unruly version. One where the weeds pick their spots. Don’t tell Mrs. C but I kind of enjoy the isolated patches of discord. It is also one of those spring scents which herald the change from winter. The early days of the season are incessantly green. At this point in the year the natural scent is a sharp vegetal green out there in the world. I have enjoyed the occasional perfume which also attempts to capture this. Parfum d’Empire Mal-Aime might be the best version yet.

Perfumer Marc-Antoine Corticchiato has a reputation for translating his Corsican home into perfume. He has never shied away from using the rougher edged elements of his island. For Mal-Aime he obtained an extraction of the weedy yellow flowers of inula from the family Acquarone. M. Corticchiato had been a lifelong friend to the recently deceased father. The sons took up the challenge of delivering an inula essential oil to him. 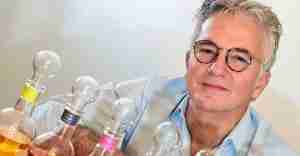 When I looked up inula I found that it is used in aromatherapy. I found a fascinating recipe where it is part of an anti-anxiolytic cocktail of inula, frankincense, vetiver, chamomille, and ylang-ylang. It is also used to clear the sinuses and lungs. If I’ve understood Mal-Aime inula has a severe green quality. It is a contrast to the fresh-cut grass of oximes. This ingredient is laden with terpenes which give it a more bitter profile. It is the co-star of Mal-Aime along with one of the most precious materials in perfumery, orris.

Mal-Aime is like the person from the wrong side of the tracks attracted to the prettiest person at the party. In the early moments M. Corticchiato rides in on a wave of elbows courtesy of inula, nettle, thistle, and bramble. This is as prickly an accord as you might imagine. What is amazing about it is that he manages to turn it into a pleasant scratchiness instead of an unyielding sandpaper. This crackles across my skin. It is also why I am careful in attributing everything to the inula because these other ingredients also have their quirks. Then rising out of this thicket comes the beauty of orris. It is like a floral sunrise as it adds a delicate powderiness with a sturdier slightly sweet rootiness. I write a lot about the versatility of orris. This is one of those occasions where every bit of it comes into play. It creates a contrast at the core around which the weeds can orbit.

This is an amazing perfume. It feels like the evolution from an earlier fragrance, Corsica Furiosa. This time every rough edge is allowed to shine in the glow of floral beauty. I don’t expect to smell anything like it the rest of the year.