The heritage brand Oriza L. Legrand has done a pretty good job of recreating some early 20th century recipes nearly one hundred years later. The creative team of Franck Belaiche and Hugo Lambert have resurrected this brand by understanding the history of perfume from that time while allowing for modern tastes. The original collection of ten, released in 2014, carried their vintage pedigree beautifully.

It was with some surprise that I received my press release for the latest release Villa Lympia. It spoke of casting “an air of summer over the Riviera for the first swims of the season.” It also carried packaging with a woman in an old-fashioned bathing costume. The whole aquatic/beach style of perfume didn’t come into being until the late 1980’s. This meant Messrs Belaiche and Lambert weren’t working off of a previous recipe. As soon as I sniffed Villa Lympia I realized we had taken a detour. This is a member of the category of beachy perfumes. It is done in a way that felt very 1970’s to me. 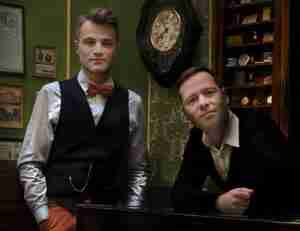 The 1970’s were a very plastic time. It seemed anything that could be extruded from polymers was turned into a product. The first moments I smelled Villa Lympia the top notes created that very scent of fresh plastic. It does evolve into a more traditional marine perfume but at first it felt like I had to peel the cellophane off of it.

Villa Lympia opens with that plastic accord. I am guessing it is composed of some of the traditional ozonic and aldehydic components usually employed to produce a sea spray effect. This time it goes sideways into this cellophane wrapping. After nearly an hour the plastic eventually does blow away leaving the mineralic smell of hot sand which is sweetened a bit by immortelle. It eventually ends on a desiccated woody accord meant to evoke driftwood.

Villa Lympia has 8-10 hour longevity and has moderate sillage.

If you have enjoyed the previous Oriza L. Legrand fragrances for their ability to reclaim the past Villa Lympia will be unlikely to impress you. On the other hand if you take it as a member of the “day at the beach” style of perfumes Villa Lympia does that really nicely. I actually found the cellophane accord worked as a functional way to sort of mentally unwrap the perfume on the days I wore it. I was happy to jump ahead fifty years to the 1970’s and spend a day at the plastic beach.

Disclosure: This review was based on a sample provided by Oriza L. Legrand.