It is funny but at the time I didn’t recall 2004-2005 as being an especially auspicious year for independent perfumery. It is only as 2014 has moved along and a number of our best, and most established, independent perfumers are celebrating ten years, or so, that I missed noticing the convergence of the class of 2005. Perfumer Olivier Durbano was one of those who did leave an impression when he released his first perfume Rock Crystal back then. I say this often but one of the pleasures of having been around at the beginning makes the moment when they create something transcendent all the more enjoyable. M. Durbano’s tenth perfume Promethee is a moment of fire-kissed transcendence.

When I reviewed last year’s Lapis Philosophorum I mentioned that M. Durbano being able to interpret from myth versus the reality of stone freed him to be especially creative. Promethee shows even more of the creativity that was on display in that fragrance. M. Durbano wanted to capture the myth of Prometheus and his tricking Zeus while regaining fire for humanity. Prometheus would pay a price for this betrayal by being shackled to a rock while attacked by an eagle while his immortality kept him alive. Eventually Hercules would free him. M. Durbano chooses his keynotes and accords to re-tell the story in perfumed form. Prometheus used a stalk of fennel to capture the flame from Zeus. That forms the core of the top notes. M. Durbano’s near-trademark mineral accord evokes the years of imprisonment chained to the rock. The smell of the woods in the forest reveals the smell of the freedom to walk amongst the trees once again. 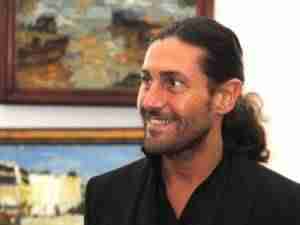 M. Durbano opens Promethee with a stalk of fennel glowing softly with the banked fire of spices. Sage, pink pepper, nutmeg, and fenugreek add an herbal flame atop the fennel. The fennel along with the fenugreek provide a strongly anisic character which the herbs and spices complement perfectly. The heart is the olibanum based mineral accord M. Durbano has used in the past. This time he allows the accord to represent the weight of the rock Prometheus is chained to. In the other perfumes this has appeared in it is often a foundation for other notes. In Promethee the mineral accord is made more prominent and it gives it weight. I have always admired this particular accord, in the past, but by using it so boldly it makes me appreciate it even more. The base notes form a forest walk free of the chains with cedar as the core along with vetiver, labdanum, storax, and lavender absolute. The balsamic facets of storax are the glue which holds the base accord together.

Promethee is the best perfume M. Durbano has ever produced. It is by far his most complex and complete creation. While I can pick apart the various voices in the chorus Promethee succeeds so well I really don’t want to make the effort. When I mentioned that the freedom to interpret the mythological freed M. Durbano’s creativity I couldn’t have imagined it would lead to something like this. Promethee is one of the best new perfumes of 2014.

Disclosure: This review is based on a sample provided by Olivier Durbano at Pitti Fragranze 2014.