When it comes to inspiration for perfumes Scheherazade and the Arabian Nights has probably inspired as many perfumes as there were tales told in the story. If fragrances are tales told by the creative team then especially in the Oriental genre every perfumer should have the opportunity to enthrall a wearer for one night. Perfumer Luca Maffei takes his turn with Nobile 1942 1001.

One of the things I have admired about the Nobile 1942 creative team of Massimo Nobile and Stefania Giannino is since 2014 they have taken the brand in a new direction. It mainly consists of taking the well-known fragrance forms and giving them a contemporary shine. It has been an up and down effort but when there have been ups they have been very good. Working with Sig. Maffei they decided on a soft Oriental theme for 1001. 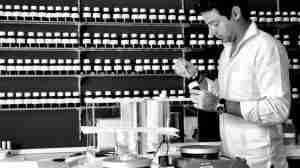 One of their inspirations was the written word. Sig. Maffei includes a papyrus focal point upon which he writes in notes of spices, flowers, and woods. The modern part of this is many Orientals take as part of their being to carry an intensity. 1001 is constructed to be a compelling soft-spoken voice of a storyteller inviting you near enough to hear.

A soft whisper of spices from a piquant susurrus. Ginger, cardamom, pink pepper, and saffron are like offerings given on an altar as each finds a place in the top accord. The watery green woodiness of papyrus arrives next. Sig. Maffei then uses the slightly spicy woody quality of turmeric along with rose to form the place from which the tale is being told along with the page it is written on. It is an abstraction of a scroll. The more traditional components of Orientals are in the base. Sandalwood, amber, vanilla, and musk end 1001 in a familiar place; which is where all well-told tales should conclude.

I think the softness of 1001 turns it into a rare office friendly Oriental. By choosing to go very soft it doesn’t skimp on the most important characteristics of the genre. Instead it allows Sig. Maffei to tell his tale of an Arabian Night with a beautiful whisper.