Perfume is bound up in its own rules of etiquette and manners. It is one of the things which can keep people from embracing fragrance as part of their life. One of the great pieces of the rise of independent perfumery was the addition of the creatives who had no patience or respect for these norms. If they wanted to join the party, they wanted to tip things over on their way inside. Some of them wanted to stand outside and moon everyone inside. One of those who stuck his tongue out at the perfume establishment was Alessandro Gualtieri.

Sig. Gualtieri started his own brand Nasomatto just so he could give perfume lovers his version of what perfume can be. From 2008-2014 he released a set of perfumes which lived up to his stated principle of, “I want my perfumes to have an intelligence of their own, not just be slaves to my meaning.” In multiple interviews he has spoken of how the process he uses is about losing control and allowing inspiration to pull him in directions. It has led to perfumes which have an active intelligence matching the one who is blending the ingredients. 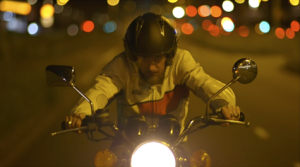 Alessandro Gualtieri from the documentary “The Nose”

In 2014 we were told Blamage was going to be the final Nasomatto. In 2016 that turned out not to be correct. Sig. Gualtierei released Baraonda and it reminded me of what I was missing from not having the brand around; a gleeful pinch of anarchy. Now two years later we have a new bit of commotion; Nasomatto Nudiflorum.

When I saw the name, I thought it might be based on a variety of jasmine which carries the common name of “winter jasmine”. It turns out that the common name of Jasminum nudiflorum prepared me for what Nudiflorum was going to present as; an icy jasmine.

Nudiflorum opens with a set of icicle sharp chilly ingredients. Hard to be sure but I am guessing a mixture of aldehydes and ozonic notes. These are then tinted green with a galbanum-like ingredient. I kept thinking of these as fine frozen green needles when I wore Nudiflorum. The jasmine seems to be encased in the ice as it is kept at a distance. A set of musks swirl about the frozen accord. The final stages of Nudiflorum marry some smoke and leather as if they were trying to defrost the floral from its icy armor. It doesn’t ever really open the jasmine up fully, but it sure tries.

Nudiflorum contains much of what makes Nasomatto a stand out even within the independent landscape. Sig. Gualtieri trusts that there are those who will enjoy following him on his journey. Nudiflorum is another opportunity to find out who is ready to join Sig. Gualtieri at blowing raspberries at the safe corporate fragrance industry. I am happy to be one who is ready to wear Nudiflorum and do just that.