One of the more interesting presentations at Pitti Fragranze was the one for the new release from Masque Milano. When I walked through one of the aisles I was met with a stand which had a Russian samovar as its centerpiece. When I focused a little more I saw Alessandro Brun and Riccardo Tedeschi, the Crative Directors for the brand, standing behind it. I knew that the promised fifth fragrance from Masque Milano called Russian Tea was ready to be tried. 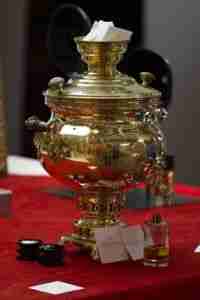 Sigs. Brun and Tedeschi had visited Russia and were treated to a Russian Tea Ritual while in a snowy Saint Petersburg. They wanted to capture in a perfume not only the tea ritual but also the journey of the tea leaves by train across Siberia to their eventual location. As they would tell me, before giving me some to try, Russian Tea when being transported by train is kept dry by wood burning fires underneath. This causes the tea leaves to take on a smoky character. Another component of the transportation is the use of mint to also modulate the smokiness of the fires and keep the tea fresh. Once the tea is presented as part of the ritual a teaspoon of raspberry preserve is added. To encompass the journey from tea leaves to samovar, perfumer Julien Rasquinet was asked to bring this to life. For M. Rasquinet this would be his last independent perfume before taking a job with IFF. He would deliver this perfume on December 31, 2013 and on January 1, 2014 he would destroy his lab to take on his new duties. As a final nod to his independent career M. Rasquinet goes out on a high note. 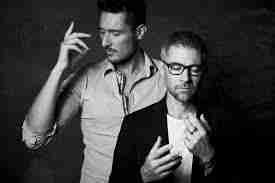 The opening of Russian Tea is all of the things around the tea ritual. There is a hint of mint as the leaves are prepared. The raspberry preserves are placed in a pot on the table. The leaves give off a piquant aroma carried by a pinch of black pepper in the top notes. The tea then begins to brew, thick and savory, in the olfactory samovar. M. Rasquinet uses a very intense black tea accord and to keep it from being too dark he cleverly uses immortelle to temper the strength. It is really a quite brilliant choice as the maple syrup feel of immortelle adds just the right amount of contrasting sweetness to make the black tea comforting. As the cup is placed before you the steam arises carrying all the scents of the journey as birch and leather form a smoky duet. Incense wafts across the base notes as a wonderfully eccentric grace note.

Russian Tea has 10-12 hour longevity and above average sillage.

When I drink tea I enjoy it dark and smoky. Russian Tea serves me up a fragrance that is not only dark and smoky it is also full of all the splendor of the Russian Tea Ritual throughout. This is a perfume which is as comforting as a cup of strong dark tea on a winter’s day in St. Petersburg.

Disclosure: This review is based on a sample provided by Masque Milano at Pitti Fragranze.