Back at the end of last year I found out there was a perfume coming from three of my favorite creative people in perfumery. Two of them are the owners-creative directors of Masque Milano, Alessandro Brun and Riccardo Tedeschi. As the brand enters its second decade they stand at the top of independent perfume. The other one is a young perfumer who had a spectacular year in 2020, Mackenzie Reilly. She is a perfumer who finds new ways to tell fragrant stories. Together they have collaborated on Masque Milano Lost Alice.

The setting for this perfume is The Mad Hatter’s tea party from the Lewis Carroll’s “Alice’s Adventures in Wonderland”. This has been an inspiration for many perfumes. One reason is the idea of creating a new perfume is a real-life version of creating a new reality. Whenever the people behind my latest perfumes show me their process it is quite often a party of ingredients and inspirations told in larger-than-life ways. The perfume might be meant to take you to Wonderland, yet the creativity right here is as energetic as anything The Mad Hatter can imagine. 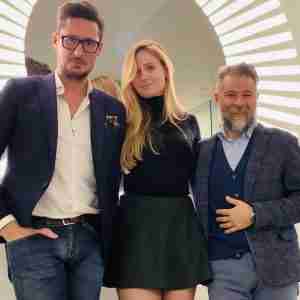 One of the reasons that Masque Milano has been so creative is because they look for the new perfumers to work with. On a videoconference to announce Lost Alice all three spoke to the collaboration. How each of them had specific things they brought to the final result.

One of the things Ms. Reilly was able to bring to this party was a set of ingredients from Laboratoire Monique Remy (LMR). Each perfume oil provider has a set of crown jewel ingredients. At IFF, where Ms. Reilly works it is the LMR palette. Most of the time you get a couple of these in any given fragrance. Because Sigs. Brun and Tedechi are committed to the highest ideals Ms. Reilly were able to use six LMR ingredients. This bit of quality needs to be mentioned because it is through the nuance of these exquisite ingredients that Lost Alice is found.

This is a perfume made up of three distinctive accords. The opening is Earl Grey tea replete with bergamot over which a cloud of black pepper and sage hover. This was directly inspired by a line from the book describing a part of the tea party where there is “too much” pepper in the air. Here it is just right. By using the sage it harmonizes to give an expansive air to the pepper which keeps it from becoming overwhelming. The heart is built around orris concrete. Ms. Reilly reinforces it through ambrette seed and carrot. This makes sure the powdery part of the rhizome is held in check. This orris is earthy root. This one reminds me of dough. Which is when a fabulous accord of sweet cakes arrives. The orris and the sweet rise together into the spicy top accord. It comes to a close around a steamed milk accord given depth and creaminess through sandalwood. The final addition is what makes Lost Alice rise to new heights.

As homage to the Italian creative directors Ms. Reilly uses the LMR version of Broom Absolute. This ingredient flows through the perfume. It gathers in the sweet cakes and adds a little honey. There is a grainy texture which adds froth to the steamed milk. Finally it is a catalyst through which the whole perfume ignites. It creates a vividness which envelops it all.

Lost Alice is meant to be the opening scene in the final “Act of Dreams” to complete the perfumed opera begun with their first releases. Sigs. Brun and Tedeschi along with Ms. Reilly have formed a creative dream team. By inviting me to their party I’ve found one of my favorite perfumes of the year.