Those who read me regularly know I enjoy a sense of brand aesthetic developed over time. The easiest path is to have a pairing of creative director and perfumer over multiple releases. It allows for both to create at atmosphere which becomes identified with the brand. Until now I would’ve said that was all that is necessary. Marc-Antoine Barrois B683 Extrait has made me consider if there is another piece to that kind of success.

Creative director-owner Marc-Antoine Barrois and perfumer Quentin Bisch have been working with the same central leather accord. In 2017 in B683 they produced the most luxurious version of that leather. Two years later in Ganymede it was an opaquer version that gave new insight by making it more expansive. In B683 Extrait it goes the other way as they add in some rough edges while also making it more intimate. M. Bisch stretches and forms his leather accord into another form entirely. 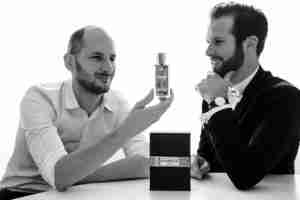 The leather accord at its base level is a drier version than most others. It is not the birch tar Cuir de Russie so familiar to many. This accord has a refined austerity which seemingly plays into M. Bisch’s ability to tune it to different effect.

The leather appears from the first minute and remains until the end. In the early moments, the effort to roughen it up begins. At first the crisp tart snap of green apple is a complement. That changes as cumin applies the first irregular piece. M. Bisch allows it to run against the grain of the leather accord with a sweaty humanity. The next bit of unevenness comes through the sharpness of violet leaf as it cuts through the accord. Next comes the olfactory sandpaper of strong medicinal oud. This is an ingredient which finds as much to harmonize with as to oppose. There is a moment here when the leather accord has the feel of newly tanned cowhide. That impression is given some depth through an earthier patchouli fraction. The base is meant to provide some relief with the vanilla-laden sweetness of sandalwood.

B683 Extrait has 16-18 hour longevity and moderate sillage.

The perfume oil amount here is at extrait concentration which adds to that sense of intimacy I’ve mentioned. Of the three perfumes so far released by Marc-Antoine Barrois this one is the most emotionally satisfying. Each of them has their own personality but this is the one I would choose if I only had to own one. What it has made me think about is maybe having a signature accord is another piece of creating a successful niche brand.