Back in my teenage days, in the 1970’s, unscrupulous dealers would take advantage of the naïve by selling them a bag of oregano claiming it was marijuana. It worked because there was nobody around to ask if it was real. I always wonder how many people in my generation smoked some oregano thinking this whole business of getting high was lame. The current version of a bag of oregano are various herbal blends sold over the counter claiming to get you high. Things are changing at a rapid pace these days with marijuana on the verge of being available at the local strip mall. I was reminded of the marijuana substitutes when I tried Mancera Hindu Kush.

There is a thriving marijuana sub-culture in perfumery with three having quite authentic accords; Kinski, Nasomatto Black Afgano, and By Killian Smoke for the Soul. When I want a marijuana perfume that is where I turn. Hindu Kush, based on its press materials, wants to join that group. It doesn’t quite measure up but as bags of oregano go it is a nicely done spice and woods perfume. 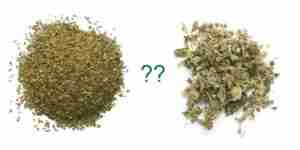 Which is marijuana and which is oregano? (photo: boxden.com)

Hindu Kush opens with the spices. Clove most prominently which reminded me of Kreteks more than a joint. Black pepper and saffron support the clove through the early moments. Then I believe the perfumer is attempting to construct a marijuana accord from oud, patchouli, cumin, and labdanum. On my skin that never comes together. The cumin joins in with the clove to form an earthier spice accord which the patchouli is also matched to. The oud and labdanum find some companionship from cedar, sandalwood, and gaiac wood in the base. It provides a rough-hewn complement to the similarly themed spice accord. Some white musk provides a bit of lift, while vanilla adds some sweetness, to the base.

If you’re looking for a marijuana perfume Hindu Kush is not it. It is a rough-edged spice and woods perfume which I probably enjoyed more than if they hit the mark. This time I was happy to get a bag of oregano.