Pierre Guillaume has successfully spread himself over three distinct lines each containing their own aesthetic. Huitieme Art Parfums has come to be the one in which M. Guillaume experiments. He has featured new raw materials or attempted to create specific accords new to his palette. For the latest release Liqueuer Charnelle it is a “cognac bouquet” he is working towards. 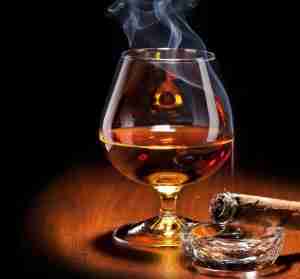 Cognac is one of the more complex bouquets to try and capture because it is a complicated process which leads to the bottle. After taking grapes and allowing them to ferment it is distilled multiple times to concentrate and raise the alcohol level. This concentration has an effect of also making even the most subtle of aromas when it was more dilute now more prominent. After being aged in oak barrels it is blended to produce what goes in the bottle. When drinking a snifter of cognac I spend as much time inhaling the sweet slightly fruity fragrance as I do sniffing it. To re-create this is not so easy because the pleasures of a fine cognac is the fragility of the bouquet. To turn it into a perfume was going to take precision and patience.

M. Guillaume takes the approach of allowing a few of the components of the eventual accord to have a little time by themselves in the early moments. As a result the opening carries a mix of pink pepper and black pepper. Then the other pieces of what will eventually form the accord begin to assemble. A bit of violet and a pinch of astringent green. A touch of elemi along with a soupcon of raspberry. These allow for vanilla, oak, and tobacco to form the spine upon which these notes will flesh out the cognac accord. There is a moment about an hour in where Liqueur Charnelle rises like the finest cognac being swirled in a snifter. As Liqueur Charnelle proceeds to the end the cognac accord decays and what you are left with is sweet tobacco and wood.

There is a fantastic atmospheric feel to Liqueur Charnelle that made me feel as if I should be sitting in a private club while wearing it. That the cognac accord is so well realized is part of it but it is also the richness of the perfume itself. It feels elegant in a very louche way. I like the way it makes me feel refined while in my everyday clothes instead of a smoking jacket. If you like boozy fragrances Liqueur Charnelle is one of the best in this category.

Disclosure: This review was based on a sample provided by Huitieme Art Parfums at Pitti Fragranze.