One of the thrills of Cosmoprof North America was to actually meet in person independent perfumer Christi Meshell. I have been impressed with the arc of her career since I became aware of her in 2010. Over six short years she has evolved her small indie perfume brand, House of Matriarch, in to a true brand which is now being sold at Nordstrom department stores across the US. This broadening of her audience as well as her brand is a welcome thing. Ms. Meshell has always had a consistent aesthetic which she has developed assiduously. Particularly the last three years have seen that inflection point I write about so often with self-taught perfumers. There is that moment when the raw talent becomes more refined while truly realizing a particular vision. That happened in 2012 with the release of Black No. 6 (known as Blackbird back then) and Coco Blanc. These were fragrances with definitive intent behind them which Ms. Meshell realized. They changed the way I looked at her as a perfumer and held her later releases to a higher standard; one which she has had no problem keeping up with. She was ready to take the bold step of branching out. 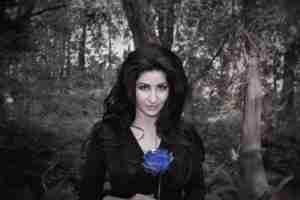 While we were talking at Cosmoprof I was talking about her inflection point moment. She thought maybe her next release was going to be another of those. She pulled out a small tester of this new perfume Kazimi. She told me she has been working on it for three years which definitely showed in what was coming to my nose off of the strip. I was looking forward to being home where I could test it all on its own.

Kazimi is an alternative spelling of the astrological tern “cazimi” which means “in the heart”. Ms. Meshell has also given it the subtitle of “Blue Rose”. Kazimi is a perfume which comes alive in the heart of an exotic rose never grown in any garden. Kazimi is a blend of multiple rose sources into a supernatural olfactory fantasy of a rose. 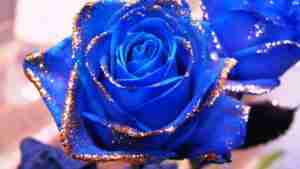 Ms. Meshell uses as her opening rose an attar-like rose oil called “ruh gulab”. It is composed primarily of rose damascene grown in the Indian Himalayas. Ms. Meshell adds a freshening effect by using white ginger to fizz across the face of the intense rose. Ms. Meshell adds in a tincture of rose damascena which provides a different face of the same rose in the top; less deep and more of the petals. That effect is substantiated with the use of a rose oil only from the petals. This is like a rose completely balled up with hundreds of petals ready to burst. Which it does into a woody base of wild crafted cedar, oakmoss, and green heart wood. This provides a similar effect that sandalwood does in traditional attars. The woody notes pull the rose away from the core of it all and more towards the simple pleasures of the petals. This is where Kazimi stays for hours on my skin. Ambergris and Africa stone show up later on but they add just a hint of muskiness.

I have worn Kazimi a few times since my return from Cosomoprof . each time I wear it I am more impressed with it as a complete construction. It continues to display the ever expanding abilities of Ms. Meshell as a perfumer and an artist. It also has connected the best on an emotional level with me as this kind of rose is what I prefer to wear. Kazimi has found itself in the heart of this perfume lover.

Disclosure: This review is based on a sample provided by House of Matriarch.