If there is a perfume series on which to take the temperature of an in-house perfumer at Hermes it might be the Merveilles series. Begun in 2004 with Eau des Merveilles by perfumers Ralf Schwieger and Nathalie Feisthauer. It was meant to be a salute to ambergris and it was amazing in its ability to capture the subtlety of that important fragrance ingredient. Just after Jean-Claude Ellena was named in-house perfumer one of his earliest compositions was Elixir des Merveilles. M. Ellena’s take was to float the ambergris not on top of the ocean but instead a sea of luscious chocolate. It has always been my opinion that this was M. Ellena’s response to Thierry Mugler Angel as a way of doing a sophisticated gourmand. M. Ellena would do another in 2012 L’Ambre des Merveilles which was more in keeping with his minimalist aesthetic. Now that Christine Nagel has taken over as in-house perfumer at Hermes it is her turn to add to the Merveilles line; Eau des Merveilles Bleue.

Mme Nagel decides to concentrate on the eau of the ocean for this latest Merveilles. It is a fascinating commentary on how the aquatic genre can be re-invigorated with imagination and by resisting using Calone along with the other typical ozonic notes. In the press materials, there is this quote from Mme Nagel, “I marveled at the pebbles, wet from the ocean; they had such a particular color and luminosity, and I discovered on them a salty, mineral taste”. Instead of going for sea spray and ozone Mme Nagel chooses to go for stone and salt as she translates that “salty, mineral taste” into a perfume. 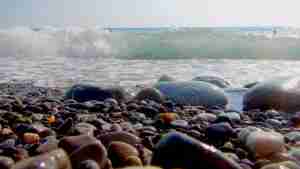 The juxtaposition of those two inspirations shows up right away. A mineralic accord is matched with a sea salt accord. To mimic the luminosity of the brine covered pebbles Mme Nagel shines a shaft of lemon to provide the sparkle of sunlight off the pebble in your hand. Then the tide goes out leaving the pebble drying out on a piece of driftwood as at least a couple of the dry woody aromachemicals are used to create a soft desiccated wood accord. All during this the mineralic accord transforms from damp stone into dried earth. The base is a mixture of white musks and patchouli. As in the previous development Mme Nagel is keeping this on the drier side which makes me think this is a fractionated patchouli being used but I am not sure of that. The bottom line is this ends in an accord of the sand drying out as the waves recede with the tide.

For nearly twenty years I avoided the aquatic genre because of its banality. In the last couple of years, I have been shown time and time again that banality is due to lack of creativity. When a perfumer really is given the freedom to create even in what seems like an overexposed segment of fragrance they can show you there is lots of space to be explored. Mme Nagel has shown that the aquatic genre is not played out it just needs imagination. She has created a new aquatic which I know I will be wearing a lot as the days get warmer. Eau des Merveilles translates to “miracle water”. Eau des Merveilles Bleue should translate to Miracle Mineral Water.

Disclosure: This review was based on a sample provided by Hermes.