As much as I enjoy writing about the perfumes that manage to connect with me there is a downside. That is when yet another too large collection by a self-taught perfumer arrives. It is frustrating because the naivete of the untrained artist has the spectre of some good ideas but they are so often sketches; not fully formed concepts. I want to tell them before they’ve gone to all the expense of formulating and bottling this vestigial collection to stop and concentrate on the strongest entries. Dazzle the masses with quality instead of quantity. When I received my envelope of samples of Heretic Parfums it was another example of this kind of callow creativity. Except one of the eight did manage to haunt me; it is appropriately named Poltergeist.

The man behind Heretic Parfums is Douglas Little. Mr. Little has had a long career, via his website, as “a master of visual communication and storytelling”. This is most often conveyed as department store window displays and branded installations. According to the Heretic Parfums website Mr. Little has been “obsessed with fragrance for as long as I can remember.” Like so many before and probably after this is where he believes he has something new to show to the fragrance world. In the case of Heretic Parfums it is natural fragrance which, again on the website, he states “is a unique and unexplored niche within the fragrance world”. It is this kind of ill-informed nonsense which puts my teeth on edge. I want to send him the website of The Natural Perfumers Guild so he can meet some of the other people who have been working in this “unexplored niche” for years. 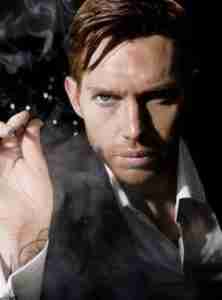 When I tried the eight perfumes in this debut collection seven of the eight were exactly what I expected. Mostly capable half-baked ideas. The materials Mr. Little is employing are of good to high quality. Just as I was about to file the whole collection away as forgettable the last sample I tried, Poltergeist, turned out to be the one which actually showed there might be some promise in Mr. Little.

Poltergeist is a surprisingly fascinating study of deep powerful notes with florals flitting throughout like optical illusions. Poltergeist opens with a strong blast of pine and wormwood. The pine is bold and the wormwood even bolder. Wormwood is the material behind absinthe. In Poltergeist the anisic qualities provide a nice companion to the camphoraceous pine. This is where geranium and neroli glide within and without. It was a pleasure while wearing Poltergeist to notice them for a moment only for them to disappear for a few moments. This all heads towards the only real base accord in the entire Heretic Parfums collection as the apparition grows fangs made of birch tar, oakmoss, and myrrh. It is this which haunted me enough to give Poltergeist a wear or two.

There is an old Southern saying, “Even a blind pig finds an acorn once in a while.” It will take some time to see if Poltergeist is the ghost of a blind pig or indicator that Mr. Little does have something to say with fragrance. Time will tell.

Disclosure: This review was based on samples from Barney’s.