As an observer of fragrance 2016 is going to go down as one of the more interesting years. A big part of that is the generational shift to the Millennials as the desired consumer demographic. So far this year many brands have decided to take on the task of appealing to them by using their previous successful marketing skills and perfumers who are decidedly not in the age group. As we enter the last part of the year there was room for a different tack. That it came from Comme des Garcons makes it even more interesting. 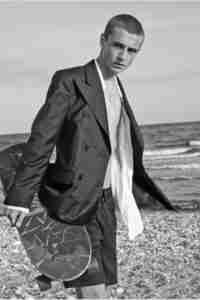 This time they are going right for the heart of this generation by using one of their fashion icons, Gosha Rubchinskiy. Mr. Rubchinskiy is a skateboarding designer of street wear. After showing his designs at 2014 Paris Fashion Week he produced a debut collection for the Comme des Garcons Dover Street Market stores. It was so successful they entered a partnership with Mr. Rubchinskiy where they do all the production of his designs. Mr. Rubchinskiy has a unique way of looking at the things he designs. In an interview with the Business of Fashion website he had the following quote, “Brands like Supreme and Gosha replaced musicians,” said Rubchinskiy. “Before, teenagers had a favourite band and they waited to be the first to get new singles. Now, you do not need to go to stores to buy records. But I think people still want to have objects. They buy t-shirts not as clothes, but as a fan piece or something collectable.” If you think that is overblown the other brand he mentioned, Supreme, released a brick with their logo on it. It sold out immediately getting huge prices on the online auction sites. The latest “single” to drop from Mr. Rubichinskiy is a perfume with his name on it; Gosha Rubchinskiy.

Creative director at Comme des Garcons fragrance Christian Astuguevieille collaborated with Mr. Rubchinskiy on the brief they would give perfumer Alexis Dadier; “young people hanging together, skating together — concrete and skateboards.” Together they have come up with a perfume which has something different than any of the other Millennial focused attempts I’ve smelled this year. 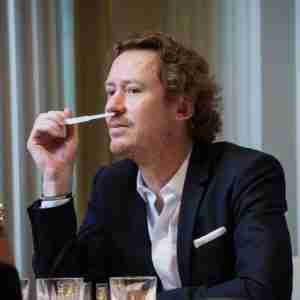 Gosha Rubchinskiy starts with an herbal citrus effect. M. Dadier uses mandarin in conjunction with angelica root and buchu. The latter two raw materials provide an opaque version of herbal facets. They provide a light peppery, minty chord. By using the two stand-ins the presence is dialed way back. Even the mandarin is not as juicy and bright. Where this perfume takes off is in the base as that promised “concrete and skateboards” comes together. There is a definite presence of the rubber wheels from styrax and birch. There is the wood of the skateboard deck with vetiver while patchouli provides the grounding.

Gosha Rubchinskiy is by far the boldest attempt to capture this younger market. It reminds me of a previous perfume meant to capture the generation before this one. It makes me wonder if this is “cdgone”. It is much more interesting than that might indicate as there is a lot of old school CdG spliced into Gosha Rubchinskiy. I will be watching to see how this “single” is received by the consumers it is aimed at.