There are some brands which just don’t click with me. It is not that they are poorly constructed they just don’t do anything for me. Which makes it hard for me to write about them. I will often receive e-mails asking if I like something from one of those brands to which I reply, “not yet”. If they keep releasing new perfumes eventually there is one which does break through. Usually it is something which is chock full of my favorite ingredients. Imagine my surprise to find myself liking Gallagher Fragrances Fineapple.

Daniel Gallagher began his independent perfume brand in 2016 releasing nine in the debut collection. While none of them made an impression on me one thing did stand out. If there is a flaw to first-time independent perfumers, it is they can’t stop adding things to their creations. Mr. Gallagher stood out for releasing more streamlined formulas. He followed up a year later with two more releases which again were more noteworthy for their restraint than their effect. 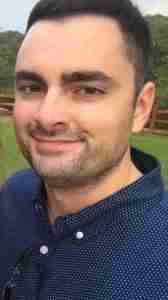 When I received the latest release, Fineapple, the name had me thinking this was going to join the rest of the line. My antipathy to pineapple has been chronicled in previous reviews. A perfume promising me a lot of pineapple? That should have been a non-starter. Except Mr. Gallagher’s succinct style used some of the things I see as flaws in the fruit and turned them into something enjoyable.

If there is a consistent complaint I have about pineapple in perfumes is it is used as a sweet fruit bludgeon. So strong it overwhelms. Mr. Gallagher by using a smaller ingredient list embraces that exuberance while refining the overall effect to something much more enjoyable.

The pineapple is there right from the start, but Mr. Gallagher also has a tart green apple there simultaneously. What this does is prevent the pineapple from going all juicy. It focuses it with the crispness of the apple sharing that trait with the pineapple. It is an ideal pairing. The rest of Fineapple is kept simple with an expansive jasmine, synthetic woods and musky ambrette. They are all used as complementary support to the apple and pineapple.

I always am pleased to find a pairing which helps me appreciate an ingredient I was previously agnostic about. Mr. Gallagher makes a fine apple-pineapple perfume in Fineapple.

Disclosure: this review is based on a sample from Gallagher Fragrances.