When I received my first five samples from the new brand Ex Nihilo there was one which captured my attention straight away. It caught my attention simply by its name, Vetiver Moloko. I think Stanley Kubrick’s movie “A Clockwork Orange” based on Anthony Burgess’ novel is one of the great movies of the 1970’s. At the beginning of the film our protagonist Alex is sitting in the Korova Milkbar sipping a Moloko Vellocet, drug laced milk. The drink will lead the gang out to a night of “ultraviolence” and catalyze the rest of the movie. What was brilliant about that opening scene is visually it set the tone for everything in less than a minute. Seeing a fragrance called Vetiver Moloko made me wonder if the same could be done with a perfume. 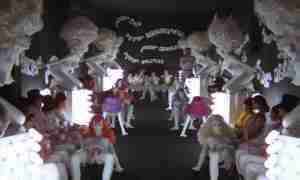 The Korova Milkbar as depicted in Stanley Kubrick's "A Clockwork Orange"

The Ex Nihilo creative team of Olivier Royere, Sylvie Loday, and Benoit Verdier would ask perfumer Guillaume Flavigny to create something “unusual and addictive”. To not only take something as well-trodden as vetiver but to also give it a twist worthy of the name. M. Flavigny succeeds beyond my expectations. He keeps it simple but he creates milky addictive vetiver as requested.

M. Flavigny opens this with Bulgarian Rose. The slight citrus haze over a spicy core draws you in. Brilliant bergamot provides sparkle. M. Flavigny brings his milk accord forward to mix with the rose in equal parts. This is a fabulously entertaining part of the development. It is almost as if a rose has been pulled out of a glass of milk dripping white liquid off of the petals. I was sorry to see things move along but there are things left to do this night. Cypress and amyris form a woody bridge to the vetiver. M. Flavigny chooses an earthy vetiver as his source. It has the smell of the ground trod under my boots. The final nod to the Moloko is a shot of vanilla to keep it sweet and to connect back to the milk.

Vetiver Moloko is easily my favorite of the first five Ex Nihilo perfumes I’ve tried. I still have four more to track down but I will be surprised if they are better. There is a real aesthetic at play in these Ex Nihilo perfumes which I really enjoy. There is a lot of interpretation of classic perfumery design and it shows this creative team carries a unified vision for the brand. My advice is to try them all but if you’re only going to try one Vetiver Moloko is the one you should get my droogies. Viddy that!