There is an acronym in software, WYSIWYG, which stands for “What You See Is What You Get”. It generally is used for word processing and editing programs to indicate that what you see on screen will be reproduced when shifted to a different program. In the acronym filled world of computers it serves as a reminder that the best programs are the ones which let you see the final result. I have never considered whether a perfume could qualify for that acronym where See is replaced by Sniff. Then I received Ex Idolo Ryder.

Ex Idolo arrived on the fragrance scene late in 2013 with Thirty-Three. It was named after the exquisite 33-year old Chinese oud perfumer and owner Matthew Zhuk had sourced and used as the core of that fragrance. It was a classical rose and oud perfume but Mr. Zhuk had assembled a coterie of elegant ingredients which made that familiar combination take on an air of sophistication. Thirty-Three was one of my favorite new perfumes of 2013 because Mr. Zhuk took the classic and gave it a modern retelling. 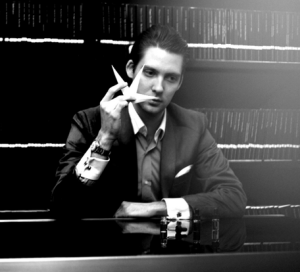 The new release, Ryder, was inspired by the old members-only clubs of the London districts of Mayfair and St. James. Tobacco, booze, and polished woods provide the evocation of that. Mr. Zhuk is again working with another beautifully chosen ingredient in Omani Frankincense. In Thirty-Three the oud was the heart of a typical perfume pyramid. Ryder eschews that tradition in lieu of a very linear construction which takes that frankincense and drops it in the middle of a gathering of the other dark and warm notes with one specific exception which is what makes Ryder more than just a fragrance that sits there being dark and brooding.

When encountering a perfume like Ryder it is almost like a smell-based Rohrshach test to see which note I notice first because they are all there right from the first moment I apply it. When I received my sample because of all the talk about the frankincense it was what I noticed first. This has the slightly metallic character I associate with good frankincense. It certainly provides a resinous boost throughout to Ryder. The first day I wore it the tobacco was what caught my attention initially. The second day it was the boozy whisky accord. I am sure as I wear it throughout the fall the amber will impose itself on a different day. All of these are good but Mr. Zhuk elevates this with the choice of jasmine to rise out of all this old boy’s club collection of notes. I detect the jasmine straightaway but it seems to impose itself on the rest of the fragrance about an hour in to wearing it. Mr. Zhuk added this note to represent the shift to admitting women to the clubs which inspired Ryder. The jasmine does a great job of being that first woman through the door casting a challenging eye across the room daring anyone to deny her admittance. Without the jasmine Ryder would just be another warm collection of notes. The jasmine makes it something entirely different.

Once the jasmine takes hold Ryder doesn’t develop one jot differently for the remaining hours on my skin. For some a linear fragrance is seen as a lack of compositional skill. That is a tenet that I would adhere to the great majority of the time. Ryder is the exception to that rule because Mr. Zhuk places each note in his perfume still life in its exact place; then steps back. It really is WYSIWYG kind of perfumery. When the ingredients and the ideas are as good as Ryder it is a sniff worth seeing.