The 1920’s and The Lost Generation make up one of my favorite eras. Not only from a historical perspective but also that of societal change. I would say that it would take until the 1960’s before society would undergo a similar change driven by the youth of the time. It seems that perfumer Shelley Waddington of En Voyage Perfumes has also become interested in this time and place. Her interest was piqued by working on her homage to Zelda Fitzgerald called Zelda which came out last year. Ms. Waddington began to delve into the perfumed history of the time and also began to wonder what Zelda might have worn. The 1920’s were great years for perfumery with Ernest Daltroff’s work at Caron right at the top of the class. Ms. Waddington came to the conclusion that Caron Bellodgia from 1927 would be Zelda’s choice.

Caron Bellodgia was M. Daltroff’s carnation-centric floral on a base of sandalwood and musk. For her re-interpretation, Fiore di Bellagio, Ms. Waddington adds some well-chosen additions to the florals from Bellodgia to create modern perfume with the inspiration of M. Daltroff’s classic. All of the ingredients present in Bellodgia are found in Fiore di Bellagio. Ms. Waddington carefully chooses some new additions like citrus on top, gardenia in the heart, and resins and vanilla in the base. All of these extra notes work very well and never disturb the 1920’s vibe Ms. Waddington is attempting. 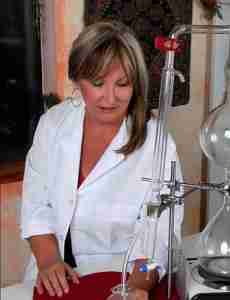 The same ylang ylang Belodgia opens with is in Fiore di Bellagio. Ms. Waddington decides to add a green shrubbery accord along with lemon. The lemon in particular adds depth and contrast to the ylang ylang. This opens onto a floral blockbuster of a heart. The carnation is front and center but it is just part of a floral fusillade of gardenia, jasmine, rose otto, orris, muguet, and violet. Ms. Waddington makes it so each of these notes can be picked out like concentrating on a single instrument in an orchestral work. While you can do that you are better served by enjoying the overall effect. Fiore di Bellagio feels like a throwback and it only becomes more pronounced in the base. Ms. Waddington trots out a beautiful aged sandalwood and civet to have the Bellodgia base notes present. She chooses to round those out with a rich vanilla to turn the sandalwood sweeter and creamier as well as a group of resinous notes which keeps the civet from being as feral as it could be.

Fiore di Bellagio has 10-12 hour longevity and above average sillage.

Ms. Waddington has done a marvelous job creating a companion piece to Zelda. Both creations create a wonderful “out of time” sensation without feeling like museum pieces. If you are a fan of Zelda or Retro Nouveau perfumes Fiore di Bellagio is one to put on your sampling list.

Disclosure: This review was based on a sample provided by En Voyage Perfumes.