There is nothing which exemplifies the principle of “it is so bad it is good” than the 1970’s cult movie “The Rocky Horror Picture Show”. It was one of the earliest examples of a bad movie kept alive because some people found something lovable about a film containing time-traveling transvestites from the planet Transylvania. One of the things which makes it endearing is the filmmakers just couldn’t stop themselves adding in one more thing to the mix. It means that somewhere within the running time of the movie there is at least one thing which will make you smile. That is the hallmark of most of the movies which fit the “so bad it is good” category; lots of recognizable bits and pieces jammed together.

I was thinking a lot about the “so bad it is good” concept while trying the new mass-market release Dior Sauvage. Francois Demachy who has been in charge of all things fragrant at Dior has made the Dior version of the perfume for a man who only has one bottle of perfume on his dresser. As with many other brands it requires M. Demachy to mash together a number of popular masculine perfume tropes into his own version of a “greatest hits” perfume. That there is a market for this kind of perfume I have no doubt. Other brands have proven there is. When I received my sample and tried it the first time. I immediately dismissed it as boring and derivative. Then I went about my evening cooking and doing blog things. Lo and behold I kept pulling the patch of skin with Sauvage on it back to my nose fairly frequently. If it was so boring and derivative why couldn’t I completely ignore it? I felt I needed to try wearing it at least one day, which turned into two days. Yes I’ve smelled all of this before. Yes it is as unoriginal as it sounds. But I couldn’t stop myself from enjoying it. 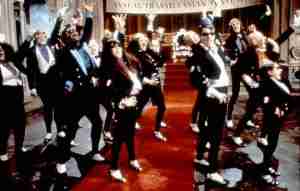 If there is going to be one thing which keeps people at arm’s length it will be that Sauvage wears its synthetic heart on its sleeve. Without doing a thorough analysis I am pretty sure there is only one naturally sourced ingredient in the formula. That ingredient is Szechuan pepper and it is one of four notes which provide a chaotic start to Sauvage. M. Demachy takes geranium, the aforementioned pepper, bergamot, and elemi and smooshes them together. With this he begins to check off boxes; citrus (It’s just a jump to the left), spice (and then a step to the right), masculine floral (with your hands on your hips), and light woody resin (you bring your knees in tight). He adds in synthetic ambroxan (but it’s the pelvic thrust), safe base notes of patchouli (that really drives you insane) and vetiver (let’s do the Time Warp again).

Sauvage has 18 hour longevity and above average sillage.

Sauvage is as fun as doing the Time Warp at a showing of Rocky Horror Picture Show. Just like that kind of thing you might feel a little guilty for enjoying it so much. Better yet just embrace Sauvage and take a jump to the left.

Disclosure: This review was based on a sample provided by Dior.