I know it isn’t even Halloween and I’m going to start talking about Christmas over the next few paragraphs. For all of you who can’t stand the idea bookmark the page and come back in a week or whenever you’re ready to start the Holidays. Let me just tell you that it is a truly extraordinary perfume which has me doing this; and it is a limited edition.

I love the Holidays and I really love having a Christmas tree. It is a full spectrum experience of the smell of the tree paired with the visual of bubble lights and ornaments. I think my affection for the smell of Christmas trees came from my time in high school, in South Florida of all places. One of my best friends was a member of an organization called Key Club which is the junior version of the Kiwanis. Their major fundraiser was selling Christmas trees in a lot. I wasn’t so big on being there during the selling. I was very big on being there with the overnight crew who would keep an eye on things in the early hours of the morning. We would sit in folding chairs around a fire pit talking about the things teenagers talk about. Broken parts of the fir trees found their way into the flames. There would always be a moment when the wind would shift and the smoke would swirl around me with the smells of the cut trees surrounding me. The camaraderie of a shared experience created bonds which have lasted over forty years for me, of which that smell is the trigger for that memory. 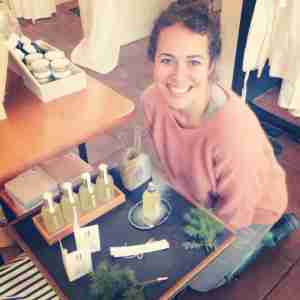 Shared experiences can be the genesis of some great ideas. This past May at the Hammer Museum on the same weekend The Art & Olfaction Awards were handed out there was an exhibition at the Hammer Museum called the AIX Scent Fair. While there independent perfumer Sam Rader, of Dasein, met fellow independent perfumer Josh Meyer of Imaginary Authors. Over the course of the weekend they decided they wanted to work together on a sequel to Ms. Rader’s first release for her brand called Winter. That fragrance was the near photorealistic smell of a Christmas tree. Ms. Rader captured my attention with that first release. Now in collaboration with Mr. Meyer she has released a limited edition called Winter Nights.

In Winter Ms. Rader took a spectacularly sourced pine essential oil and supported it with cardamom and lavender. That trio remains but is much transformed; made softer. Ms. Rader and Mr. Meyer use a more attenuated pine source. It is matched with a haze of smoke. I must compliment the perfumers the smoke here is perfectly balanced it hangs like a haze not as an overwhelming presence as it does in so many lesser fragrances. Then instead of cardamom, cardamom tea is used. Instead of lavender absolute, lavender flowers are used. Both call back to Winter but have a much lighter presence. The final addition is a suite of darker musks.

Winter Nights is a limited edition of only 400 bottles made especially for the 2016 Holiday season.

Ms. Rader finished doing all four seasons earlier this year. Her tour through the seasonal year showed she was a special talent. Mr. Meyer has also become a standout with his Imaginary Authors releases, especially the ones from this year. Winter Nights is very close to the best perfume from both of these talented independent perfumers. It is constructed like a delicate gauze of memory of midnight in the tree lot. Winter Nights is as close to those high school December nights as I have ever encountered. It is a sublime Holiday perfume.