When I first got to New York City in the mid 1980’s it was the heyday of the exclusive clubs. Clubs like The Palladium or Area were where you went to be seen. If you were a known NYC scenester you were on the guest list. If you weren’t you lined up behind a velvet rope hoping for the doorman to look at you and say the magic words, “You’re In.” As you approached the door the expectation of magic present behind it would give way to the fact that it was another club with some more famous people in attendance then the one closest to you. It still was a lot of fun to share the dance floor with a celebrity. 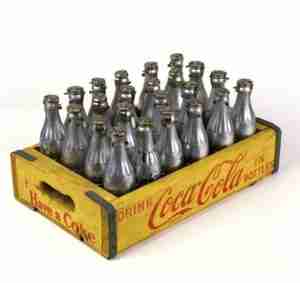 If you were to look for the beginning of this velvet rope segregation you might look back fifteen years or so to the world Andy Warhol created in NYC. That was another scene where your entry was predicated on adding something to the overall milieu. As with so many things from Mr. Warhol he was eerily prescient on where these nascent trends would end up. One piece of art he did, in 1967, was called “You’re In” where he painted a case of iconic glass Coca-Cola bottles silver and supposedly filled each bottle with toilet water. That’s water from the toilet not eau de toilette. The idea to poke fun with the homophone of the name of the piece. The soda maker was not amused and hit Mr. Warhol with a cease and desist. It also was revealed that it wasn’t toilet water but a cheap drugstore cologne the color of urine inside. Exactly what made Mr. Warhol interesting.

Fifty years later Comme des Garcons wanted to re-visit this in their own homage to it. Lead by Creative Director Christian Astuguevieille they created a set of six silver cylinders each with its own Warhol quote on it encased in a carboard facsimile of the yellow wooden crate of the original piece of art. One thing I was sure of was M. Astuguevieille was not going to be putting toile water inside. What is inside Andy Warhol’s You’re In is a clever twist on the ubiquitous cheap citrus eau de toilette of the 1960’s. This is a citrus eau de toilette given a Comme des Garcons twist.

The top accord is bitter orange within a cloud of aldehydes. I laughed a bit because where aldehydes often remind people of hairspray these aldehydes reminded me of the smell of the fog machines at those velvet rope clubs of the 80’s. It is an odd set of aldehydes also containing a metallic edge as well. Pittosporum with its hybrid scent of orange blossom and jasmine bridges the citrus to a fuller jasmine. It is a classic floral citrus accord adequately achieved. Coriander bridges this into a synthetic woody base. Later on, the metallic effect from the top accord returns along with a bit of white musk.

Andy Warhol’s You’re In has 8-10 hour longevity and average sillage.

This is a project where the Comme des Garcons style was a perfect match for looking back at Mr. Warhol to synthesize a 2017 interpretation. I felt like I was allowed past the velvet rope of creativity both brands stand for with Andy Warhol’s You’re In.