One of my favorite new independent brands and perfumers of this year is Shawn Maher’s line, Chatillon Lux. Lot of perfumers choose to evoke their surroundings. Few have done it as well as Mr. Maher has taken on his St. Louis home. It is difficult to know what direction his perfumes will take when reading the accompanying text. For his latest he wrote that it “an homage to a mid-century modern steamboat that was an icon of the Mississippi”. You might read that more carefully than I did but in my mind’s eye I saw one of those paddle wheelers where a poker game was taking place. Imagine my surprise when I saw the ship, he was designing a perfumer to, below. It sure as heck isn’t my grandfather’s steamboat. This looks like something out of a futuristic movie. A classic Art Deco design. A twist on what a riverboat suggests. Which also means Mr. Maher would make a perfume which reminds you of something classic but gives it a newer sleeker design. That is what you will find in Chatillon Lux Admiral. 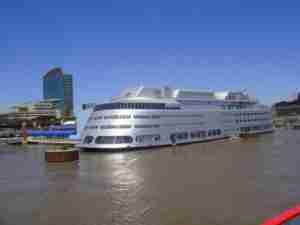 In every review I’ve done I’ve pointed you to Mr. Maher’s “Scent Notes” column on his website. For those who have been following independent perfumery for a long time it reminds me of the early columns by Andy Tauer; providing similar insight into how Mr. Maher makes perfume. In the column about Admiral he speaks about how he is not a fan of aquatic perfumes. Yet he was going to make a perfume about a riverboat. Because of the milieu he wanted to evoke he was already ahead of the game. Almost every aquatic wants to capture the beach mise-en-scene. Mr. Maher wanted Admiral to be a Mississippi River aquatic. That means no salt air or sea spray. A river is in motion, but it doesn’t generally have waves crashing on the shore. Mr. Maher was going to have to concoct a watery accord which captured the difference. That he does it so well is what makes Admiral stand out. 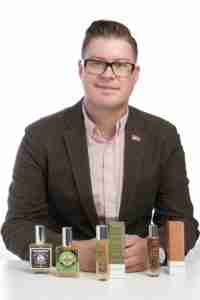 If you’ve ever stood on a riverbank with a bamboo fishing rod in hand the top accord will take you back. Mr. Maher uses a diffuse set of citrusy ingredients without getting too focused. It is a hazy sunshine of a humid summer day. He constructs it around orange blossom and verbena primarily. Some blackcurrant bud and clary sage provide a sharper vegetal green to the overall accord. This floats like a raft on Mr. Maher’s perfumed river. The aquatic accord here is fantastically engineered to give that flowing river instead of crashing waves effect. That Mr. Maher uses some of the most common synthetics all precisely balanced to pull this off is noteworthy. His accord is made up of Calone, Ambroxan, Iso E Super, and Helional. He takes these in judicious amounts and stirs them together with seaweed absolute to provide a sense of the riverbank. It results in an aquatic accord I can almost guarantee you’ve never tried before. Finally he creates a soft smoke accord to represent the Admiral itself. So many independent perfumers go wrong when using cade oil. Mr. Maher has learned just a little, as part of a larger accord, has a much more dramatic effect than just smoking the place out. Here he counterbalances the cade with vanilla and tonka bean over a light leather. This is what a smoke accord should be.

Mr. Maher said he wanted to make a different aquatic. All he had to do was go down to the river in his hometown and watch the Admiral to create a riverboat aquatic.