I am a big Pink Floyd fan. Which meant when I heard Bruno Fazzolari’s new fragrance was called Ummagumma I was drawing parallels in my head before it arrived. Ummagumma was the fourth album by Pink Floyd. You could say it was the first by the four musicians who would become most recognizably Pink Floyd. Over the next ten years until the release of The Wall in 1979 the band would stand for experimental rock music. For Ummagumma they were far from a band at that point. On a two-record set, the first was a live recording. The second disc was each member of the band taking half a side to do their own thing. What you get are the different strands of the eventual DNA that will come to define Pink Floyd. But on Ummagumma the strands by themselves are not all that compelling. It is like seeing the ingredients of success before assembly. 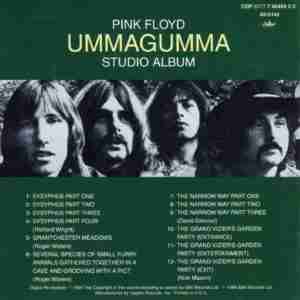 Wondering what a perfume carrying that name and alluding to that album might be was fascinating theorycrafting until it showed up in my mailbox. What I would find is something reminiscent of the Pink Floyd members wanting to do something on their own apart from being part of a band. In 2016 Mr. Fazzolari collaborated on a very experimental gourmand perfume with fellow independent perfumer Antonio Gardoni called Cadavre Exquis. It was a Pink Floyd kind of gourmand perfume; experimental and engaging for that quality. At its heart was a beautiful cacao which was one of Mr. Fazzolari’s contributions. A year later Mr. Fazzolari excises the cacao from his fragrant collaborative cadaver and resurrects it as the heart of his solo perfume Ummagumma.

One other connection to the musical inspiration is that Richard Wright was insistent on each member of the band getting to have half a side to do their own thing because he wanted to do “real music”. Many took that to mean he wanted to be less experimental. His song on Ummagumma is called “Sysyphus”. It seems like it was his attempt to do something symphonic in nature. He would call it pretentious in later years. It feels throughout its thirteen minutes like it is Mr. Wright proclaiming he is a real musician making real music. As for the song I agree it is pretentious. The perfume Ummagumma is not pretentious although it does feel like it is Mr. Fazzolari showing that he can make a straightforward ambery gourmand perfume.

That fantastic cacao from Cadavre Exquis shows up right away in Ummagumma and will become the focal part for most of the evolution of the perfume. On its own this is the smell of 100% cacao bars used to bake with. It has a rich slightly bitter quality with the lack of sugar really keeping it from going all treacly. Instead it stays as a strong axis upon which Ummagumma rolls forward upon. In the early development saffron and the clove-like nature of carnation give the chocolate an offbeat spicy combination. This gets pierced by twin resinous spikes of labdanum and frankincense. The frankincense shimmers in conjunction with the chocolate it provides an almost sacred depth. For those looking for the typical Fazzolari artistry here is the place where it shows for a short time. Ummagumma moves forward into a lush ambery base given texture with tobacco. Many perfumers would have used the tobacco as primary focus. Mr. Fazzolari uses it as sweet texture with which to introduce tonka and vanilla in the late stages.

While Ummagumma the album is not considered to be one of Pink Floyd’s best albums the perfume is one of Mr. Fazzolari’s best releases. In the past it has been for his artistic perspective on classic perfume tropes which have made him stand out. Ummagumma shows if he desires to he can play it straight and produce “real perfume” which is really good. Because of the musical inspiration my whacky imagination kept going to that part of every live rock concert where they introduce each member of the band followed by a little riff on their instrument. In that place I kept hearing, “Aaaand soloing on chocolate Bruno Fazzolari!”

Disclosure: This review was based on a sample provided by Bruno Fazzolari.