When I was in college I had to broaden my knowledge of chemistry to obtain my degree. In the analytical chemistry lab course I came across a piece of equipment called a crucible. It was a porcelain container in which I could place a material followed by heating it up to extreme temperatures safely. Within that container, the contents would be transformed by the heat without losing their inherent nature. What resulted wasn’t scorched ashes but altered perspective. Independent perfumer Bruno Fazzolari has achieved an olfactory version of this with his latest, Feu Secret.

Iris is one of the cornerstones of perfumery. It has been there from the beginning. It is also indelibly ingrained in the everyday because of its use in lipstick and face powder. To those of a specific age iris means Coty lipstick. If you were to ask people to use an adjective to describe iris I would venture “powdery” would be the winner. Because of that nature iris is sometimes seen as less varied. I would have been one of those who shared that opinion prior to discovering niche perfume. Over my time down the perfume rabbit hole I have learned just what a multivariant ingredient iris can be to a perfume. One reason this isn’t more widely known is the richest most faceted from of iris is also one of the most expensive ingredients to obtain and use. 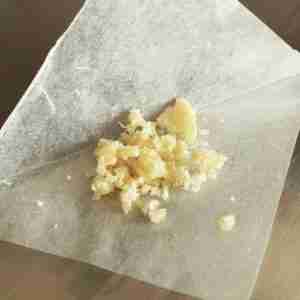 That ingredient is orris butter or orris concrete. It is obtained by harvesting the root of the iris, not the bloom. Drying it for three to five years then extracting and distilling that material. I was given a small grape sized globe of orris butter a few years ago. It is a more fascinating ingredient than ambergris to spend time with. It seems Mr. Fazzolari also shares this fascination. In a blog post on his website he dives even deeper into orris butter than I just did.

As I wore Feu Secret, which translates to Secret Fire, I was struck about how Mr. Fazzolari was firing metaphorical jets of warmth at the orris butter at the heart of Feu Secret making me think of it as a crucible to allow all that is there to be exposed.

Orris butter has a bit of an ice princess at its frontiers. Early in Feu Secret Mr. Fazzolari chooses to show that off a bit with eucalyptus using its mentholated quality to lift that up into the embrace of green hemlock. The chill is thrown off by the warmth of pink pepper and turmeric. It is the turmeric that is the guide to a rooty sweaty quality I don’t think I’ve ever noticed to this degree when wearing other orris-centric perfumes. It isn’t body odor sweat but that clean honest sweat of digging in a flower bed. A bit musky in many ways. The final amount of heat comes as the orris butter is subsumed in birch tar and cedar. This is where the orris butter is truly transformed into something special. The cedar sets up the framework for the birch tar to connect to the orris upon. There is not a hint of powder to be found here. This is where the earthiness of orris butter is brought to the foreground. It carries a bit of yeastiness which pushes back against the pungency of the birch tar. The muskiness also rises to greater prominence before, after all of the heat recedes, leaving the beautiful main ingredient as the last thing to depart.

This is by far my favorite of Mr. Fazzolari’s work so far. I have enjoyed everything he has made so far but there hasn’t been one which grabbed me as potently as has Feu Secret. It is my favorite new perfume of 2017 at this point.