I mentioned in my overviews at year-end and mid-year that celebrity branded perfumes, celebuscents, have been waning in popularity. On the whole I am thrilled to see this happening because the great, great majority of these perfumes had nothing to do with the style of the celebrity. They were almost all another cynical play to separate fans from their money. Most of the time the celebrity smelled “their” perfume just before it was released. It was a bad joke which was only funny to those profiting from it. Which is why the few celebrities who actually care about a fragrance product which carries their name are to be commended. Those names are also pretty well-known because they have lasted for years because of their involvement. One of the best sellers within the mass-market sector are the perfumes which carry the name of Britney Spears. 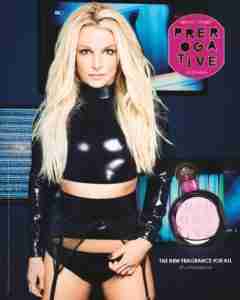 Starting in 2004 with the release of Curious her perfumes has been among the best of celebuscents. Starting then and ending with the release of 2007’s Believe she produced four perfumes which still remain best-sellers. Part of this is you can search for interviews with Ms. Spears and she knows the name of the perfumer she is working with. She also knows about the ingredients. What she is doing is what any creative director should do. With the support of the Elizabeth Arden team she helps make the decisions. For the last few years the brand has been focused on flankers of 2005’s Fantasy. They were typical flankers; none of them better than the original. I had thought that was it for the brand for the foreseeable future. I received my press sample of Britney Spears Prerogative and was strongly reminded of those early entries. Like Ms. Spears herself who has continued to perform in residence at Las Vegas; Prerogative shows she still has all the moves on the fragrance stage, too.

Prerogative is composed by perfumer Honorine Blanc. One decision that was made is to make Prerogative another of these floral gourmands so many of the big brands believe is what a younger perfume consumer desires. It is also pitched at the also presumed desire for lighter fragrances. Prerogative is more appropriately a fruity floral gourmand.

It opens with the tart goji berry. I am reminded of a kind of nutty cranberry when I’ve smelled goji berry. Mme Blanc chooses baie rose to attenuate the tartness while apricot provides a slightly juicier effect. Lily is the floral at the heart of Prerogative. This is a very typical lily with the green aspect dialed way back. The gourmand counterpart is coffee. The fruity top accord, lily and coffee come together in a pleasant wave. I found myself enjoying this part of the development a lot. It ends on an ambered sandalwood base accord which will make Prerogative a good fall fragrance choice.

Ms. Spears has traded in the notoriety of her youth for a quieter success these days. Prerogative could be a signal she is interested in getting more involved in the perfume world. I think that would be a good thing.

Disclosure: This review was based on a sample provided by Elizabeth Arden.