I have often heard Michael Edwards offer the advice to new perfumers, especially indie ones, that they should take the time to study the great perfumes and perfumers of the past. What if you had the good fortune to instead come into the possession of forty bottles of essences and bases from a perfumer’s laboratory circa sometime in the 1940’s? If you were an aspiring perfumer and could study those materials what insights and influences would that bring to your own perfumery? Those previous questions are what perfumer Antonio Gardoni has used to found his Italian indie perfume line, Bogue Profumo. 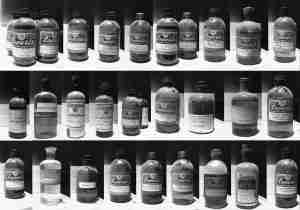 Sig. Gardoni did indeed come into a treasure trove of incredibly well-preserved bottles of an unnamed perfumer’s ingredients. After living with them he chose to reproduce one of the recipes on the bottle and released it as Cologne Reloaded. What Sig. Gardoni recreated was a cologne with an intensely animalic base of castoreum. This truly smelled of the classic barbershop cologne right down to the leather strop for sharpening the straight razor. Eau d’E would be the second release and this was a more modern take on the same cologne idea. Sig. Gardoni takes a very intense lavender and pairs it with the classic herbal citrus cologne accord. If Cologne Reloaded felt like an artifact Eau d’E felt like a modern extrapolation of that. The thing that I liked best was Sig. Gardoni’s choice to explore the unusual aspects of lavender looking to accentuate the less floral aspects. Both of these were preparation for Sig. Gardoni’s new release, Maai, wherein he combines many of the lessons learned and creates one of the finest Retro Nouveau fragrances I have ever smelled.

Retro Nouveau constructions almost by definition have to be accomplished by independent perfumers. These need to be small batch production runs. They need to be unafraid to push certain aspects right to the edge of being unpleasant. Finally, they need to fuse the present with the past without letting either dominate. When I asked Sig. Gardoni the origin of the name Maai he told me, “it is a Japanese word used in the martial art of Kendo that I practice from many years. The meaning is actually quite difficult to render but more or less it means "interval/space in between" and it's the relationship between space and time between two opponents a sort of "engagement distance" it defines the exact position/time from which one opponent can strike the other”. Maai the perfume is that interval between the Retro and the Nouveau and the “engagement distance” is precisely balanced to produce a singular perfume effect.

Maai takes the animalic themes Sig. Gardoni explored in Cologne Reloaded and creates a fascinating musky base upon which to build the rest of his new fragrance. This is what I was speaking of in the previous paragraph; there isn’t just castoreum in this base he adds in civet and hyraceum along with a bunch of other musks. All together this has an incredible depth and texture it feels as if Maai has a pounding heartbeat. It also isn’t for the faint of heart. One other aspect I really enjoy with this is when these animalic notes reach this level of concentration they also carry a honey-like sweetness which rides along on the crest like a surfer riding a monster wave.

The modern aspect Sig. Gardoni applies to Maai is by using the same technique he used in Eau d’E and taking a well-known floral and finding a more contemporary read on that note. For Maai the note is tuberose and the choice Sig. Gardoni takes is to use a deeply green tuberose as the co-focal point. What this does is provide an indolic foil to the animalic base while also producing a nascent white flower character. The tuberose never explodes into its show stopping floralcy. Sig. Gardoni captures the tuberose just shy of it bursting to life and it is a mannered tuberose but there is a suppressed energy lurking behind. This is the buzz of potential reined in as the tuberose stays poised on a precipice without falling into empty space.

There are a slug of soapy aldehydes in the top notes before the tuberose begins to impose its presence. Labdanum contains the tuberose by amplifying the green early on. A bit of rose and jasmine help to remind you there is a flower here in the heart. The indoles, from the tuberose, are the perfect bridge to the beginning of the animalic base. Sig. Gardoni swirls in a few different resins which add details like olfactory grace notes. Then the full potential of the animalic accord settles into place and cradles the tuberose within its embrace. The “engagement distance” is now down to zero, right where it should be.

Maai has 12-14 hour longevity and above average sillage.

Maai is the perfect Retro Nouveau fragrance in my opinion; Sig. Gardoni has pulled off a clever bit of perfumery that is much more accomplished than it should be. It feels like it could have come from a long-lost bottle found deep in a cabinet and it feels like it could be found on a small boutique counter next to present day brands. Maai is as good as modern independent perfumery gets.

Disclosure: This review was based on a sample provided by Bogue Profumo.