There haven’t been a lot of Rock & Roll fragrances that have actually really captured the sense of the music within the perfume. When I received my latest set of samples from Seattle-based Blackbird there was one of these collaborations in the package. Perfumer Aaron Way collaborated closely with indie rock singer Zola Jesus to develop a new fragrance to coincide with the release of her fourth album “Taiga”. The new Zola Jesus Taiga perfume is the result.

Zola Jesus is an American indie music artist who composes moody songs which make full use of her unique vocals. The video above for “Dangerous Days” off of “Taiga” is a good example of the kind of influences found throughout her work. This is of course the problem when I am familiar with the artist because I carry some preconceptions of what I think a perfume based on Zola Jesus should smell like. Zola Jesus is quoted in an interview on Nylon that Zola Jesus Taiga smells, “primal, environmental, ancestral, of earth.” I think Mr. Way approached this from the literal meaning of the word taiga as the extreme northern pine forests mainly found in Canada and Russia. Running throughout the fragrance is a swirl of consistent smoke similar to the way woodsmoke hangs in the trees on a cold winter day. 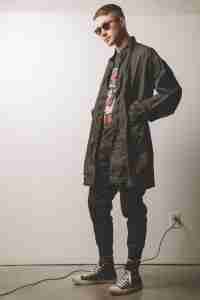 Zola Jesus Taiga opens with the smoke of both wood and incense providing a set of complementary smokiness. Frankincense is used in a very pure form and as such it carries that liturgical kind of ritual smoke with it. Mr. Way fashions a woodsmoke accord from Choya Loban and cade. This vies with two sources of frankincense from India and Oman. The latter is a particularly smoky version of frankincense. The frozen forest is represented by a panoply of wood notes as copaiba balsam, cedar, gaiac, oak, and sandalwood provide the arboreal accord in the heart. The base is an oud accord made of nagarmotha which is a much more restrained oud-like presence. It provides its own kind of exotic smoke.

Zola Jesus Taiga has 14-16 hour longevity. It also has very prodigious sillage for 4-6 hours before mellowing out to something more average over the remaining time on my skin.

I am not sure Zola Jesus Taiga captures the Zola Jesus part of the equation as well as it does the taiga part. If you’re looking for an indie rock perfume this still doesn’t fit the bill on that score. If you want a woody smoky perfume that captures a high winter day Zola Jesus Taiga gets that correct.